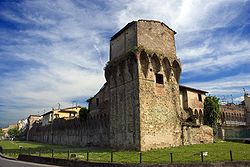 The Lastra a Signa Market in Florence

Just like every year, at the end of August and as a conclusion to the cultural summer enjoyed in the Italian City of Florence, the traditional Lastra a Signa Market will take place between the 26th and 29th of August. This event includes sporting activities, exhibitions, games, poetry, music, food, medieval markets, tombolas, and fire-eating performances in an enviable setting, the medieval town Lastra a Signa situated in the .

Like every good medieval market, there is a cattle market which, as dictated by market tradition, involves a cattle show that is set up along the river crossing through the town. As a tribute to the medieval spirit of traditional markets, a special horse show has been organised for this year’s edition where the best horses will be participating in a display of art and power. Furthermore, for the second year running those younger than 23 years old may participate in the Lastra a Signa Trophy amateur race for the entertainment of young runners.

The activities in this year’s market will take place in the customary areas and spaces, like for example in the recently restored Historic Centre situated in Piazza Garibaldi, or the Parco fluviale located along the river and the Corea district, as well as the stadium, where a music and firework show will be taking place on the 29th of August.

A must see is the Spedale di Sant’Antonio, where the photographs of the photographer Máximo Listri are currently displayed. The images have been captured through very unconventional means but achieve a modern representation of the reality that surrounds us. This will be the last opportunity to visit this exhibition as the images will soon be departing to Japanese territories.

Finally, for this edition of the medieval market two new events have been organised. On Thursday the 26th of August will be opened with a performance from the band “Banda Improvisa”, whilst on Friday the 27th of August the entire town will be converted into a giant stage to host the different performances prepared for the occasion. These performances are listed under Pane e teatro, a series of free performances paying tribute to the popular culture of the region.

Thanks to this traditional market you will have the opportunity to experience a more typical and enjoy a series of events and performances that will transport you back to the most medieval past of this Italian town.