The Triana neighbourhood in Seville 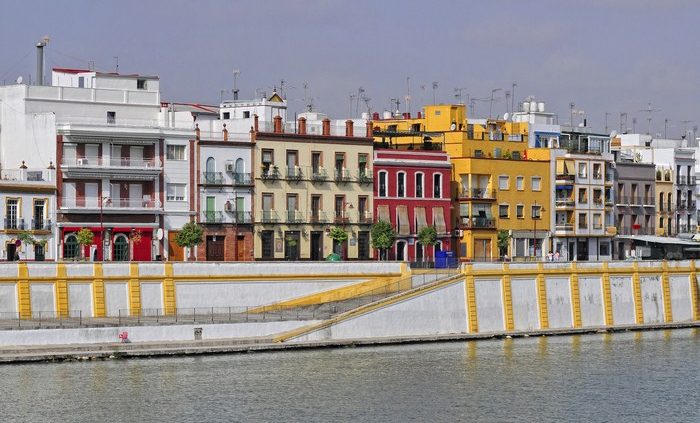 On the other side of the River Guadalquivir, Triana is one of the most charismatic neighbourhoods in Seville. Birthplace to Flamenco singers, sailors and bullfighters, Triana is proud of its distinctive character, which makes it practically its own town within the city of Seville.

It runs from the Isle of La Cartuja to the neighbourhood of Los Remedios. It has traditionally been a seafaring neighbourhood, but today many visitors flock to its food markets, tapas bars, Seville tile shops and, above all, its stunning views of the other side of the city, framed by the river.

What to see in Triana?

Puente de Triana – Although its real name is Puente de Isabel II, since it was built when Queen Isabel II was on the throne, everyone calls it Puente de Triana. It is the oldest surviving iron bridge in Spain and has connected this neighbourhood to the city centre for 161 years.

Calle Betis – Calle Betis runs alongside the river and is the perfect place to take in the superb views. Previously an area of jetties, it is now a bustling street with cafes, bars and restaurants, where you can sit in the sun, have a drink and try out the tapas, surrounded by tall, narrow, brightly coloured buildings.

Plaza del Altozano – You can get to this famous square from the Puente de Triana. It features a sculpture of bullfighter Juan Belmonte, and the church of Capilla del Carmen, patron saint of sailors, designed by Aníbal González, the same architect who laid out the lovely Plaza de España.

Mercado de Triana – The famous food market, in Calle Castilla, next to Plaza del Altozano, was built in 1823 on the ruins of the Castillo de San Jorge. Inside there are stalls selling fresh fish, fruit and vegetables, but you can also eat tapas, sushi and oysters with a dash of lemon, and sample the local beers.

Castillo de San Jorge – Little remains of this castle, which was the headquarters of the Spanish Inquisition. It was demolished to make way for the Plaza del Altozano and the food market. After years of excavations, the interpretation centre opened in 2009 to provide information on the ruins and the Callejón de la Inquisición, a narrow street along which prisoners and heretics were led before their trial and after sentencing.

Calle Castilla – This street and the neighbouring Calle Alfarería feature lots of shops selling typical Triana pottery, an industry that dates back centuries. Some of the studios are open to the public and you can watch the potters at work. The 18th-century Church of the O includes images of Jesus of Nazareth and the Virgin of the O.

Calle San Jacinto – This street once linked the city to the Aljarafe, but it is now a wide pedestrian street, with plenty of shops, businesses, bars and cafes. You can visit the Capilla de la Virgen de la Estrella and the church of San Jacinto, which is alongside the Dominican monastery.

Posted in Seville, Things to do in Seville
Claudia