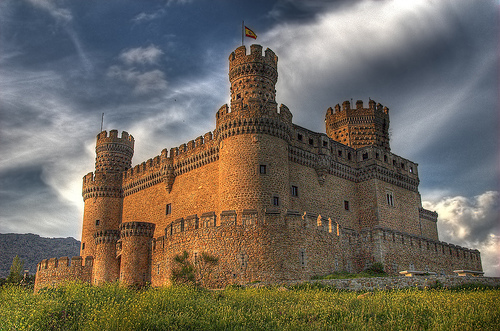 A castle at a stunning location in Manzanares el Real

Located barely an hour away from the Spanish capital is the Castle of Manzanares El Real, also known as Mendoza Castle. If you’re in Madrid and you fancy going on a little trip, this is a very special place, with magnificent surroundings that you will especially enjoy at this time of year.

This Elizabethan, gothic style castle was built in the 15th Century at the foot of the Sierra de Guadarrama and is the best preserved in the region. It was originally built as a palatial abode by Juan Guas, one of the Catholic Kings’ favourite architects. The most eye-catching part of the fortress is its cylindrical lookout towers, its mudejar decoration and the viewpoints from the Santanilla reservoirs.

If you would like to discover the castle interior in an original and different way, then we recommend the themed guided tours. It comprises a 45 minute guided tour of the palatial rooms, accompanied by Don Pedro de Zúñiga y Salcedo and Doña Isabel Asensio, a married couple from the 17th century that took over the castle in the absence of the Duke of Infantado. These two characters play lead role in an entertaining fictional play especially intended for the occasion and which is performed throughout your visit of the fortress and the rooms.

Over the summer you will be also be able to participate in evening themed guided tours which include a balancing act and juggling show, and which concludes with a light and sound show on the exterior wall of the castle.

In addition to these unusual guided tours taking you back to past times, they also organise many other events in the castle including temporary exhibitions, concerts, guided tours so that children can discover what life was like in the castle and medieval markets, etc.

A great way of ending your day, if you decide to go on a trip to Manzanares El Real, is by visiting Santanilla reservoir or the Pedriza of Manzanares, a fascinating composition of eroded and rounded rocks that were erected within the Cuenca Alta del Manzanares Regional Park. The ever-changing landscape full of little nooks was used as thieves hideouts, the inspiration for legends and setting for several international films such as Alejandro Magno (1956), El Cid (1961), The Good, the Bad and the Ugly (1966) and Conan the Barbarian (1981). It is a very special place where you can go hiking or climbing.

When: The themed guided tours take place on Saturdays and Sundays at 12pm and 1pm, from February to September. The evening tours are Saturday and Sunday from 9.30pm and 10:30pm, until the end of August. The light and sound show starts at 11:30pm and lasts 15 minutes. Price: normal 6 euro, under 14`s and over 65`s 3 euro.