Things to do this weekend in Barcelona 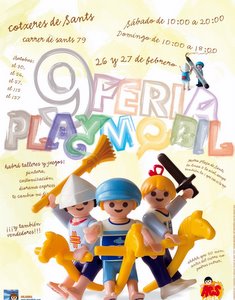 Things to do this weekend in Barcelona

Friday the 25th of February

VI Hong Kong Film Week. Casa Asia, La Filmoteca de Cataluña, and the Hong Kong Economic is presenting this edition of the festival taking place from the 6th to the 12th of March, during which films shot in Hong Kong will be screened. All the films will be shown in Casa Asia. Where: Casa Asia. When: from the 25th of February to the 6th of March. Entrance fee: 3 euro per film and pass for 40 euro to see all 20 films.

“WOMEN ARE BEAUTIFUL”. Starting today, the Foto Colectania Foundation is presenting its series Women are Beautiful, including 85 photographs by Garry Winogrand, one of the greatest innovators of the twentieth century in America, comprising a form of ode to women from the viewpoint of one of the most important photographers of the twentieth century. Where: Foto Colectania Foundation (6, Calle Julián Romea): When: Monday – Saturday from 11am to 2pm and 5pm to 8.30pm.

Saturday the 26th of February

IX NATIONAL PLAYMOBIL COLLECTORS FAIR. Fanatics and nostalgics of the legendary Playmobil dolls are in luck as on the 26th and 27th of February a national fair will be held during which recreations of films such as the Bridge on the river Hawaii, Charlie and the Chocolate Factory will be shown, and a miniature of the Guinness World Record with 68808 Playclicks, as well as scenes from the West, from the Victorian age, and from fantasy worlds will be shown. Where: Cotxeres de Sants (79, Calle Sants). When: 26th and 27th of February from 10am to 9pm and Sunday from 10am to 6pm. Entrance fee: 3 euro, free for under 12s. Metro: L1,L5 Plaza de Sants.

This Barcelona group are performing in Razzmatazz for three nights in a row ( tickets all consequently sold out) and bringing to an end to their 1999 promotional tour. So, if you can in some way get hold of some tickets, you know not to miss out on any of their concerts. Where: Razzmatazz. When: 24th, 25th, and 26 February. Entrance fee: 20 euro

CHRISTINA ROSENVINGE. International Spanish singer with suggestive voice is arriving in Barcelona to perform in the Let’s Festival and present her latest work and album of the year “Tu Labio Superior”, including collaborations with Steve Shelley (Sonic Youth) and Georgja Hubley (Yo la tengo). Where: Salamandra (255, Avenida Carriles). Entrance fee: Let’s Festival pass 40 euro, pre-sales tickets 15 euro, and 20 euro at the ticket office.

OVNI DES REALITAT. Videos and debates reflecting upon the different phenomena of dis-reality, their forms and implications, their repercussions, and the horizons they illuminate, or recall with simultaneous screenings in test mode in the Hall and Auditorium (original version with subtitles) from 7.30pm to 11.30 pm. Where: CCCB. When: until the 27th of February from 7.30pm to 11.30 pm.

VICTOR ULLATE BALLET-COPPELIA. The Victor Ullate Ballet is presenting its latest version of Coppelia divided into two music acts. The choreography and artistic director, Eduardo Leo, is in charge of the staging and highlighting the comical side of the show without losing the essence of the plot. Where: Arteria Paral-lel. When: until the 23rd of February. Entrance fee: 18/31 euro.