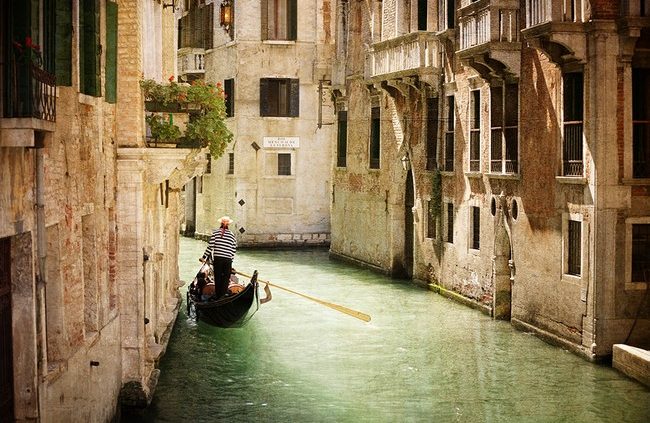 Venice is more than just a small archipelago joined by bridges and separated by canals. It has a special relationship with water, well more than just the water, there is also the carnival, bridges, stately palaces and mansions and much more you simply can’t find in other cities. These photos of Venice perfectly capture the essence of ‘La Serenissima’.

Gondolas- Centuries ago more than 7000 gondolas travelled the Canals of Venice. Today there are just over 400 and they are mostly a tourist attraction. Gondolas are all handmade and builders even take the Gondolier’s weight into account. Construction of a gondola usually takes one or two months. If you want to know more about gondolas take a look at this article.

Acqua Alta- Occasionally during the autumn and winter months a strange meteorological phenomenon takes place, the streets and piazzas of Venice flood. This is known as “acqua alta” and is caused when the water level of the lagoon rises. When flooding is imminent the alarm bells ring and boardwalks are constructed above high water, keeping feet dry. Although, many tourists appear to be unfazed and take the opportunity for an impromptu swim. They might think twice if they knew where the water came from. Libreria Acqua Alta- Some say this is the world’s most beautiful bookstore. I won’t go that far but will say it is a special place. It’s called the Acqua Alta bookshop because one of the doors faces the canal and during the acqua alta it floods. To avoid disaster, the books have been placed in gondolas and bathtubs which float when it floods. One of those hidden corners in Venice perfect for that unique photo opportunity. Spritz- The Spritz along with the Bellini is a typical drink in Venice. It is usually drunk before lunch and especially before dinner. In the afternoon drinking Spritz in the Campo Santa Margherita or in the bars close to the Rialto Bridge is the done thing.

Transport- Venice is a car free and bicycle free city. It is prohibited to ride a bike in the city. Nearly all the traffic in Venice is on the water. Gondolas, ambulances, taxis, police, delivery boats…all use the canals, which for the unaccustomed is quite unusual. Traffic Signs- Traffic signs in Venice are a little different to normal and they have their own rules when it comes to road use, in this case canal use. Motor boats circulate on the right of the canals and the gondolas and other row boats to the left. Parking spaces are actually wooden posts called “bricole”.

Street Names- Getting around Venice can be a little complicated. It seems there is no apparent order in the street numbers, numbers are assigned to neighbourhoods or “sestiere”rather than streets and correspond to the year of the building’s construction. The streets also have different names according to whether they open out onto a canal, “fondamenta”, if it is small it is a “ruga”, or finishes at a dead end, “corte”… Grand Canal- As the name indicates, the Grand Canal is Venice’s biggest canal. Nearly 4km long it cuts the city in two. There are, however, only four bridges joining the two sides, one of them is the Rialto, a perennail favourite amongst tourists and budding photographers.

This just a brief insight into the symbols and common place occurrences which form part of Venice’s day to day. If you’d like to know more about Venice especially fun fact and legends follow this link.