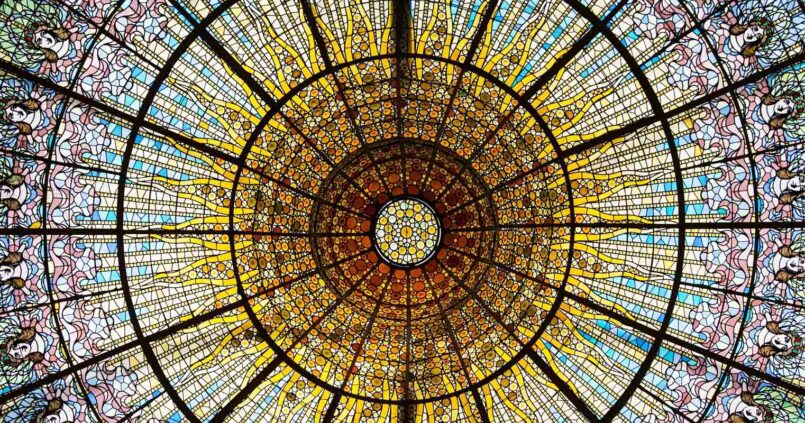 Barcelona is one of the symbols of Modernisme, the Catalan version of Art Nouveau, the late-19th- and early-20th-century art movement exemplified by international artists such as Victor Horta, Alphonse Mucha and Hector Guimard. Many of the leading lights in Barcelona, including Ramon Casas, Isidre Nonell, Josep Llimona and ceramicist Lluís Bru, don’t usually get much of a mention in tourist guides, so here at Friendly Rentals we’ve put together this Modernista tour of Barcelona for you.

Many of our apartments in Barcelona are less than three minutes’ walk from most of the architectural gems on this Modernista tour of Barcelona. Make the most of your getaway to see for yourself!

The Palau de la Música Catalana was built by architect and politician Lluís Domènech i Montaner, who was also responsible for other great Modernista buildings in Barcelona, such as the Hospital de Sant Pau, Casa Fuster and Casa Lleó Morera.

Known popularly as El Palau, it was built on Carrer de Sant Pere Més Alt for the Orfeó Català between 1905 and 1908. It only took three years to build! An amazing achievement for a building with millions of exquisite ceramic details and other ornamental features. With its brilliant fusion of work from the decorative arts in mosaic, stained glass, sculpture and forged metal combined together to stunning visual effect, it’s no wonder that it is considered to be one of the masterpieces of international Art Nouveau.

On your Modernista tour of Barcelona, climb the sumptuous flight of stairs inside El Palau to the concert hall. On stage you’ll see the beautiful allegorical mural dedicated to Beethoven accompanied by the Valkyries. Look up and admire the inverted dome with its mosaic light well, unique in the world and one of the photographic highlights of any visit to the city. On the outside wall you’ll find more allegorical sculptures dedicated to popular Catalan songs and presided over by Saint George, the patron saint of Catalonia. If you’re coming to Barcelona, don’t miss the chance to go to a concert here. You can find out what’s on by checking out their programme.

If you walk up Passeig de Gràcia, your jaw is bound to drop when you reach Carrer Provença. On the corner is Casa Milà, an architectural wonder built by Gaudí between 1906 and 1912. This unique, majestic building is also known as La Pedrera, because of its resemblance to an open-air quarry. Its rooftop, a beautiful garden with 30 chimneys crafted like statues, is one of our favourite places. It also boasts stunning views over the Sagrada Família. Designed as an apartment block for the Milà family, it is now one of the most popular buildings in the whole of Spain

A Unesco World Heritage Site since 1984, the interior is decorated with ornamental features inspired by designs from nature. We recommend starting your visit on the lower floors to see models, interactive videos and a faithful reconstruction of one of the original apartments and decor. Save the rooftop for last, enjoy the unique views and take some photos home with you. Book your ticket for La Pedrera in advance here.

Avinguda Diagonal in Barcelona is home to several striking buildings, including Casa Terradas, popularly known as La Casa de les Punxes. Built in the style of a Central European castle, you’ll suddenly feel you’re in Bavaria without ever leaving Barcelona! Modernista architect Josep Puig i Cadafalch designed it in 1905 inspired by Neuschwanstein Castle in Bavaria. Construction was headed by Bartomeu Terradas, a friend of Josep Puig i Cadafalch, and one of four children born into an illustrious family that made its fortune in the textile industry. As the only son, Bartomeu inherited the family business but was also entrusted with building a house for each of his three sisters. So, he built three completely different and independent houses in the same block.

When you get to number 43 on Passeig Gràcia, look up! Right at the very top of Casa Batlló you’ll see a sleeping dragon with brightly coloured glass-tile scales. Industrialist Josep Batlló i Casanovas asked Antoni Gaudí to redesign this building he had recently acquired on Passeig de Gràcia. He worked on it between 1904 and 1906 and the result was Casa Batlló, perhaps the highlight of any Modernista tour of Barcelona. Take a good look at the balconies, which recall Venetian carnival masks. What is the story behind this house? Industrialist Josep Batlló i Casanovas commissioned Antoni Gaudí to remodel the building he had just acquired on Passeig de Gràcia.

A Unesco World Heritage Site since 2005, its interior dives down to the ocean depths and represents many forms found in nature. The wavy façade is said to be inspired by Montserrat mountain or the waves on the sea. Casa Batlló also features colourful ornamental trencadís mosaics in many parts of the 32-metre-high, 8-storey house. Over the years its ground-floor premises were home to names such as Lumière photographers, the film producer Pathé Frères and the Syra art gallery.

They offer different guided tours and you can buy your ticket here.

Right next door to Casa Batlló is the fantastic Casa Amatller, built by architect Josep Puig i Cadafalch in the final two years of the 19th century. Casa Amatller is on the same city block as Casa Lleó i Morera and Casa Batlló, and their contrasting styles have made this stretch of Passeig de Gràcia famous throughout the city.

Casa Amatller was designed as the residence of the owner of the prestigious Amatller chocolate factory and is a clear example of Art Nouveau fused with Catalan Neo-Gothic, a style also seen in Enric Sagnier’s Palau de Justícia and Cadafalch’s own Palau del Baró de Quadras. What really stands out from the Casa Amatller is its Flemish influence, as seen in the design of the top finishes. On our Modernista tour of Barcelona, the most striking thing is its lovely inner courtyard granting access to the apartments.

Check out the wooden ceiling artesonados in the rooms and the many intricately carved columns throughout the building, including Saint George and the dragon. It’s not for nothing that Barcelona is known as the city of dragons.

If you want to visit Casa Amatller, you can book here. Casa Amatller is home to one of the most prestigious Art History Research Institutes in the world, with a library of books and photographs containing over 400,000 archives.

If you want to see more of the city’s Modernista architecture or discover more of its rich artistic and historical heritage, check out our blog for more recommendations of places to visit. Experience Barcelona to the full. 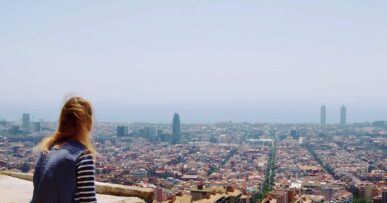