Three things to in Granada this autumn 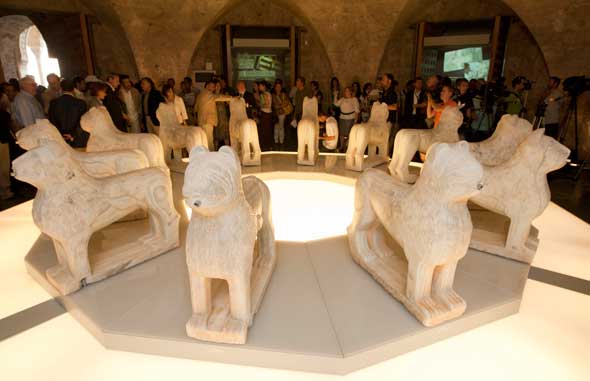 Autumn is well and truly here, something inevitable, but it doesn’t mean that everything have to stop, as life continues in all its splendour. For Granada this couldn’t be more true as its cultural agenda is jam-packed full of events for all tastes. Amongst the most exciting events this autumn, we would like to suggest that you consider the following three:

One of the top events this autumn is the return of the emblematic lions of the Nasrid Palace in the La Alhambra, and which have been hidden away for more than three years in the restoration workshops of the “el Patronato de la Alhambra” or Council of the Alhambra. Visitors will be able to visit the crypt of the Palace of Charles the V until the 9th of January and admire the results of three years of hard work on these twelve archaeological pieces in the famous Patio of the Lions. The lifting has provided some valuable and historical information on the lions, and although they appear the same, you can now observe a multitude of different features on each which make them different.

Each block of marble was carefully chosen in the quarry by the sculptor so that the natural features of the stone would bring out the natural elements of the animals, and as a result three types of lions have been discovered based on their differentiating elements. The exhibition, entitled “Lions, the restoration of a symbol” offers visitors the opportunity to contemplate these unique Nasrid sculptures together with a reading area with five different educational topics. For a closer look at the exhibition, the Council of the Alhambra offers guided tours, a service within the program education in the Alhambra.

This Autumn the inauguration of the “Exhibition project Matisse and the Alhambra (1919–2010)” is also on the cards, and will be taking place in the Museum of Fine Arts in Granada which will allow the public to learn more about the works of this French painter. The exhibition will put on display more than one hundred pieces, including three canvases Matisse painted in Spain which will be put together for the first time, and displayed as of the 15th of October demonstrating the French artist’s fascination for the Oriental world accentuated by his visit to the Alhambra a century ago. Other pieces to be put on display comprise oil paintings, drawings, lithographs, ceramics, and sculptures, in addition to 60 works of Islamic art, ceramics, glasswork, works of bronze, and tapestries, amongst many others.

A total of 40 international renowned institutions have loaned various pieces to complete the exhibition. The discovery of Henri Matisse’s signature in the visitors’ book of the Alhambra a few years ago has been the starting point for three years of research work, and the result of the studies will be shown in the exhibition with the support of his family. Visitors of the exhibition will have free admission and there will be an audio guide service and an educational program.

If you like films, then why not pass by the International Young Film-Makers Festival? The 10th edition of this important event will be taking place between the 23rd and the 30th of October. This short film festival is one of the most prestigious events in its category on a national level and boasts of having its own spot on the international festival scene.

A week jam-packed full of films will be on offer for all ages including fiction, documentaries, and animated films, as well as more experimental formats which will be gracing the screens in this Granada festival. Furthermore, festival-goers can look forward to a performance by Lagartija Nick (Granada alternative rock group), a free “masterclass” for film fanatics, and many more complementary activities. Click here to get timetables and more information on the short films line up.

Posted in Granada, Things to do in Granada
Claudia