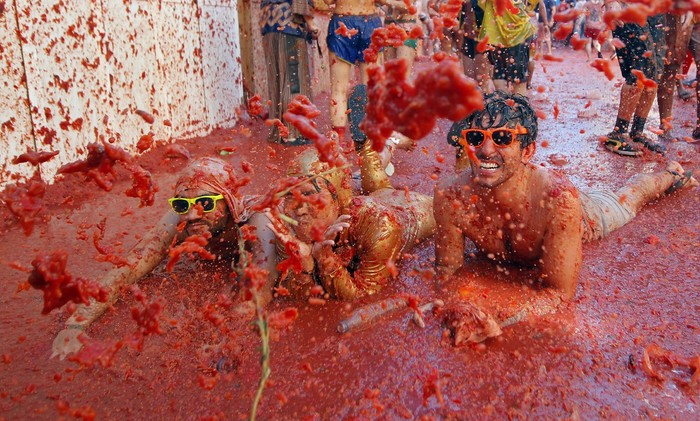 Tomatina 2016: Get your tomato at the ready!

Every year, one of the craziest and most extravagant summer festivals is held, none other than the Tomatina in Bunyol, a town only a few kilometres from Valencia. It comprises the largest tomato fight in the world and more than 150 tonnes of tomatoes are thrown during the event by festival participants. The Tomatina is always celebrated on the last Wednesday of August, which in 2016 falls on the 31th.

This is one of the most anxiously awaited events in Valencia and dates back to 1945. Whilst a parade, featuring giant figures and papier-maché dolls, was making its way through the town, a group of young people started throwing tomatoes taken from a fruit and vegetable stall at each other. They caused such a kerfuffle that the police had to intervene. On the last Wednesday of August the following year, some young locals gathered in the town square armed with several kilos of tomatoes and La Tomatina was born.

The authorities were originally opposed to the festival, and it was even banned at the beginning of the 1950s. However the festival was reinstated in 1959 following continuous requests by the locals. From then on, the Town Hall has been in charge of organising the event.

The Festival and the Rules

Although there is always a huge party the night before, the festival kicks off at 9 in the morning with everyone gathering for breakfast in Plaza Mayor. After breakfast, everyone has to keep their eyes peeled for the Palo Jabón, comprising a tall wooden pole, smeared with soap and sporting a ham right on the top. The first brave festival-goer to make it to the top gets to keep this unique trophy.

Then at 11am, a rocket is launched and amongst the screams of delight by the crowd, all red hell breaks loose! The tomato fight lasts an hour, and everyone ends up swimming in tomato flesh and juice! A great way of de-stressing and it’s a lot of fun throwing tomatoes at your friends!

Remember that you have to squash the tomatoes before you throw them so that nobody get’s hurt, and also take care with the trucks that come with all the tomatoes. In addition, they advise that you wear closed shoes, old clothes and goggles. The acid in the tomatoes can sting your eyes and we assure you that you will probably end up swimming in tomatoes.

La Tomatina tomato fight ends when the second rocket is launched. This is when the fireman trucks come through to clean the tomato laden streets. There will be rivers of tomato juice running down the street.

As well as the Tomatina, there are also parades, concerts, competitions and many other activities during the festivities in Bunyol. If you would like to take part in this fun festival, then hurry and book your apartment as during these festival days, Bunyol, Valencia and the surrounding towns are full of visitors.

Due to the success of La Tomatina you now need to buy a ticket if you want to participate in the festival. Tickets can be bought here.

How to get to Bunyol from Valencia

To get to Bunyol, you need to take the C-3 line from the Valencia-Sant Isidrio train station. The journey takes around 40 minutes.

If you prefer to get there by bus, you can take the service going from Valencia to Yatova, although there will be a special bus service running on the day of the Tomatina, going directly to Bunyol.

If you’re making your way there by car, you have to get onto o the A-3 in the direction of Madrid and then follow the signs to Bunyol.