Top 10 Things to Do in Rome 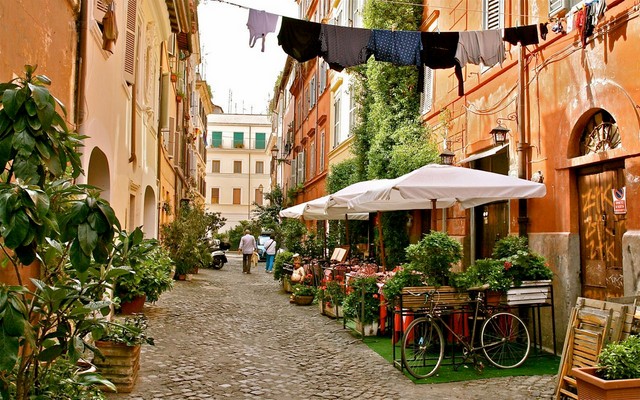 Going to Rome and unsure about what to visit? Understandable, there is a lot to see and not enough time to see it all. To take the stress out of deciding what to see and do we’ve come up with our Top 10 things to do in Rome list. It’s a nice mix of very touristy to only a little touristy. Take a look and let us know what you think.

TREVI FOUNTAIN- Rome’s largest Baroque fountain and one of the world’s most famous. Trevi fountain is an incredibly popular tourist attraction and the undisputed star of the film ‘La Dolce Vita’. It is said if you throw a coin into the fountain you’ll return to Rome and with more than €3000 being thrown into the fountain everyday, returning to Rome must be high on people’s agenda.

COLOSSEUM – The ancient World’s ultimate sporting stadium. Gladiatorial contests, public spectacles, animal hunts, executions and more all took place on the sands of the Colosseum. Today the only danger you’re likely to face in the Colosseum is from the Roman Legionaries who pose for photos.

OSTIA ANTICA – Not really in Rome but being only 20km away and key to Rome’s development we thought it should be included. Ostia Antica was Rome’s port. Today it is incredibly well preserved and you can marvel at the mosaics, intact Main Street and there is even a restaurant/bar with the menu still written on the wall. During summer concerts and plays take place in the theater.

PANTHEON – One of Rome’s best preserved buildings and at over 2000 years old that’s no mean feat. Whilst the outside of the Pantheon might be a bit plain Jane the true beauty lies inside. The Pantheon’s dome is still the world’s largest unreinforced concrete dome.

ROMAN FORUM – What is a pile of beautiful ruins today was once the central area of Rome. It was here justice was dished out, business was done and religion practiced. Ruins of the Temple of Saturn and the Arch of Titus are just two of the main sigths of the Roman Forum.

VATICAN MUSEUMS – As the name suggests these are the museums of the Vatican. There are 54 galleries in total and they house an incredible collection of art accumulated by the Catholic Church throughout the centuries. The Sistine Chapel is possibly the most famous of all the galleries.

SPANISH STEPS – Joining Piazza di Spagna with Piazza Trinita dei Monti, is another of Rome’s Top Ten tourist attractions, the Spanish Steps. They are a great place to sit and watch the frenetic activity happening all around you. Interesting fact: The Spanish Steps is Europe’s widest staircase.

TRASTEVERE – Not just another of Rome’s many neighbourhoods, Trastevere is the authentic Rome. Cobbled streets, medieval houses, excellent restaurants and bars are just a few attractions which keep locals and tourists coming back to Trastevere.

CAPUCHIN CRYPT – Bones, bones and more bones are what you can expect at the Capuchin Crypt. The bones of over 4000 monks have been arranged to form macabre patterns on walls and ceilings. At the entrance to the crypt a sign reminds us we are only on this earth for a short time, it reads “What you are now we used to be; what we are now you will be…”. Something to look forward to.

MONTE PINCIO – The view, it is all about the view. Take a wander around the gardens, visit the Galeria Borghese then drink in the view of Rome. The perfect way to end a day in Rome and this list of Top 10 things to do in Rome.

Posted in Rome, Things to do in Rome
James