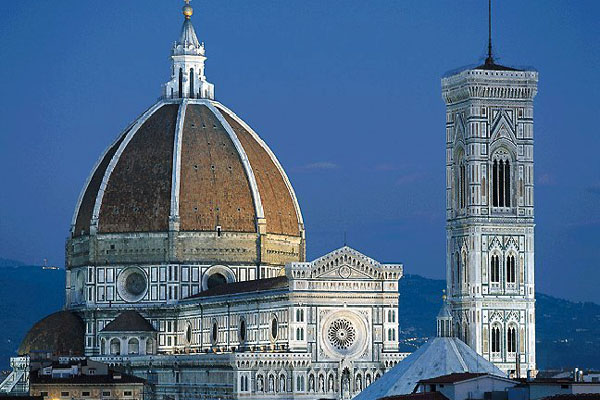 Florence is one of the most beloved cities in the world, and for good reason. The city is a melting pot of culture and history and has a wide range of art galleries and impressive museums. Even if you are not a museum lover, just taking a walk through the city centre of Florence, and taking in the beautiful architecture can be very enjoyable. To make sure u won’t miss the mayor sights of the city, we have selected the top 3 historical sights of Florence.

The Cathedral of Santa Maria in Florence, better known as Il Duomo, is a beautiful example of Renaissance architecture. It was supposed to be the largest Roman Catholic Church in the world (although the design was later reduced in size), with the first stone being laid on September 8, 1296. The cathedral was originally designed by Arnolfo di Cambio in 1294, but due to his death the second designer, Filippo Brunelleschi, started completing the building in 1420. Brunelleschi died and never had the chance to see his masterpiece. Now there is a huge statue of him watching the building.

This religious building was built in the sixth century on the remains of another baptistery. The building, which is octagonal and is faced with white and green marble, stands in the open space of a square. The inside of the Baptistery has an octagonal couple with mosaics and the walls are faced with marble. The gilded bronze doors match the building perfect, just as the inlaid floor on the inside. Some parts that were originally part of the dome, such as the wooden sculptures made by Donatello, are now captured in the Museo dell´Opera del Duomo.