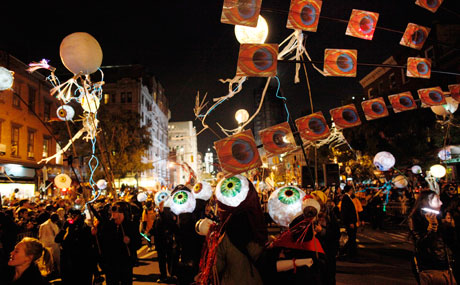 Although the festival of Halloween is not actually believed to have originated in the US, it’s been adopted with a gusto and creativity that is unrivalled by anywhere else in the world. So if you’re celebrating Halloween 2012 in New York, round up a group, get into the party spirit and hit the streets in order to face your worst fears with a smile and laugh at the darkest corners of the human imagination. If you’re wearing a terrible costume while you do so, even better.

Without further ado, then, here are our top five activities for Halloween 2012 in New York…

HALLOWEEN PARADE – In previous articles about Halloween in New York, we’ve already written about the Halloween Parade. With more than 50,000 participants and 2 million spectators, anyone can join – if they’re in costume, of course. Previous years have seen everything from whole chess sets to giant disembodied eyes. Where: up 6th Avenue, starting from Spring St. and finishing in 16th St. Blecker to 14th St. is the most crowded area. When: October 31st, from 7 pm to 11 pm. How much: free. Age: small children may find costumes and crowds overwhelming.

DEAD OR ALIVE – Even the more serious institutions are decking themselves out in their best fancy dress. Of these, we particularly like the look the New York Hall of Science (NYSCI), which will unite Halloween 2012 with the Mexican Day of the Dead. Expect bats, pumpkin catapulting and plenty of luminous paint. Where: 47-01 111th Street. When: various times from the 26th – 28th October. See full program. How much: most activities are free with standard entrance fee ($11, concessions and children under 18 $8). A small materials fee may be charged. Age: activities for all ages.

THE AMAZING MAIZE MAZE – You’ll need to have your wits about you in this giant corn maze. Find clues, solve puzzles and get out before it’s too late. On the 6th and 13th of October, the maze will also be open until 9 pm for the Maze by Moonlight. Where: Queens County Farm Museum, 73-50 Little Neck Parkway. When: Saturdays and Sundays until October 28th, from 11 am – 4.30 pm. How much: adults $9, children aged 4 – 11 $5, under threes go free. Age: all ages.

DREAD OF NIGHT – Described as a “self-guiding storytelling experience”, Dread of Night will take you through the creepily deserted buildings and pathways of the living museum that is Historic Richmond Town. Even more terrifyingly, the tour is based on true stories. Where: 441 Clarke Avenue. When: October 13th, 7 pm. How much: adults $10, children $8. Age: very young children might find the experience too scary.

THE HAUNTED PUMPKIN GARDEN – The New York Botanical Garden will be transformed into a mystical den of bats, stories and the eerie glow of pumpkins designed by master carver Ray Villafane. Various activities have been planned, including pumpkin carving workshops. Where: 2900 Southern Boulevard, the Bronx. When: weekends until the 28th October. See full program. How much: non-members $20, members $15. Age: all ages. The 5-15s age group is particularly well catered for. Not suitable for children scared of bats.

Those are just a few ideas, but there’s plenty more to do in New York for Halloween 2012. Eat, drink and be scary!