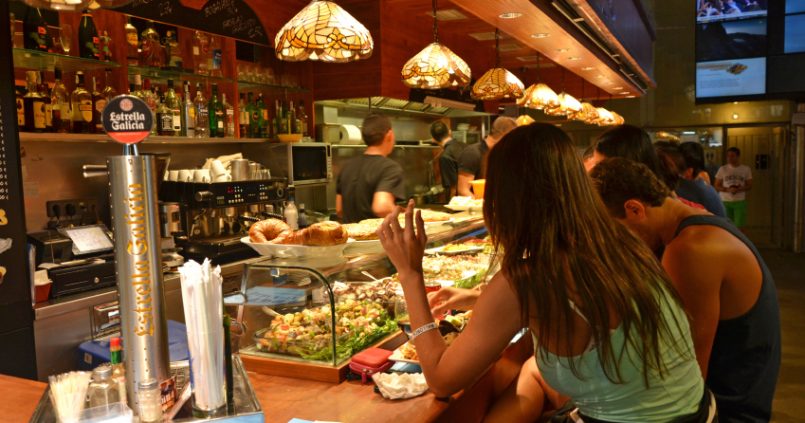 One of the great joys of a family holiday abroad is sampling the local cuisine and the food in Barcelona is amongst the best in Europe. The whole region of Catalonia has a unique culinary tradition influenced by neighbouring France and Valencia. Superb fresh ingredients are combined to create dishes distinctly Catalonian. Don’t just stick to tried and trusted international dishes on your family holiday to Barcelona – take a visit to the barrios and seek out some traditional Catalonian meals. You won’t be disappointed.

Barcelonans take their food seriously and grabbing something to eat-as-you-go is not really their style: it is said by some that they are planning supper as they are eating their lunch. Whilst you may not automatically have thought of the city as a culinary capital here are some food facts about Barcelona that might make you see the city in a different light:

Health benefits – The Spanish diet is amongst the healthiest in the world and in no part of the country could that be claimed more honestly than in Barcelona. Food essentials include the highest quality olive oil fresh garlic and the tastiest tomatoes (full of health promoting vitamins and antioxidants). With the Mediterranean on its doorstep the city also has a constant fresh supply of wonderful seafood.

Flavour and heritage – Catalan cuisine has an ancient heritage that has been preserved through the centuries. Why change a good thing? The meat will be locally sourced the seafood fresh that day from the Mediterranean and the herbs traditionally those that can be found growing wild in the mountains. This combines to produce dishes that smell and taste superbly fresh and truly inviting.

Paella – You may not realise that this dish which has become a firm favourite with people around the world has its origins in Valencia. Despite this the dish is as popular in Barcelona as anywhere else in Spain and the restaurants in the Barceloneta area are a good place to go and experience paella at its best. The word ‘paella’ simply means ‘pan’ which is not very helpful in the kitchen and is why the shallow paella pan is more often referred to as a ‘paellera’.

Spanish wines – Wine lovers know that they will be well catered for in Spain which produces excellent red and white wine varieties. Outside of Spain however Cava has developed a less than favourable (and undeserved) reputation. Of the wine producing regions closest to Barcelona is Penedes which is famed for its production of Cava. Don’t be shy about trying this sparkling wine which will complement your seafood paella perfectly and like many visitors you may come away wondering what all the fuss was about champagne.

Fine dining – Did you know that Barcelona has more than 20 Michelin starred restaurants (that’s more than in the country’s capital city Madrid)? If a world class fine dining experience is on your list of holiday activities then you are well catered for in Barcelona. Knowing this it is perhaps unsurprising that one of the best chefs in the world Ferran Adria comes from the Barcelona area.

So whether you have just 3 days in Barcelona or a two-week long summer holiday make sure you try some traditional meals on your break. All that remains for us to say is “Bon appétit!” or more appropriately in Barcelona “Bon profit! Que vagi de gust!”