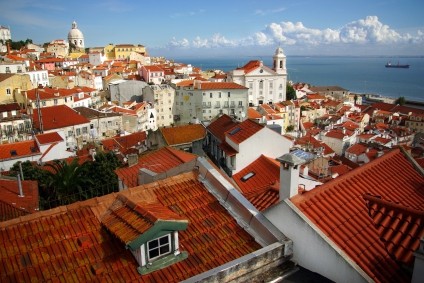 Things to see in Lisbon Classic, elegant, and with the marked tasted of a fine, mature wine, Lisbon is a city which gets a hold on you. The mosaics of black and white cobbles on the floors, the old yellow tram going up the hills, the painting on the buildings chipped by the passage of time, the passionate sound of fados, sunsets over the Tagus River… Many are the details which are emblazoned in fire in the traveller’s memory after a visit to the Portuguese capital.
There’s lots of things to see in Lisbon, so if you don’t have masses of time for your visit, here’s our travel guide to the things that stand out most in the city. These are the main attractions of Lisbon:

JERÓNIMOS MONASTERY (Mosteiro dos Jerónimos) – Constructed in the c. 16th, this spectacular monastery in Manueline style forms part of our UNESCO World Heritage. It was constructed to celebrate the return to India of the explorer Vasco da Gama, who is buried in the monastery along with other illustrious Portuguese characters such as writers Fernando Pessoa and Luís de Camões and King Manuel I. Where: R. dos Jerónimos 3. When: from October to April from 10 am to 5.30 pm, from May to September from 10 am to 6.30 pm. How much: standard entrance € 7; combined entrance to monastery + Belém tower € 10. Under fourteens go free. BELÉM TOWER(Torre de Belém) – Very close to the Jerónimos Monastery, situated in the waters of the Tagus river, this tower is one of the main tourist attractions of Lisbon. Originaly, it was used to protect the entrance to Lisbvon port. It’s also a point from which lots of the expedictions to other continents that took oplace were launched. An incredibly beautiful space which invites you to travel through time. Where: Belém coast. When: from October to April, from 10 am to 5.30 pm, from May to September from 10 am to 6.30 pm. How much: adults € 5, under fourteens free, pensioners € 3.50, students € 2.

CASTLE OF SÃO JORGE(Castelo de São Jorge) – From the highest peak of Lisbon, the Castle of São Jorge quietly watches over the city. This is one of the most well-known monuments in Lisbon. Its robust structure was constructed by the visgoths in the c. 5th, and during the c. 15th – 16th was the residence of the kings of Portugal. From the fort, there’s spectacular views of Lisbon. Where: S. Jorge hill. When: from November to February, from 9 am to 6 pm, from March to October from 9 am to 9 pm. How much: standard entrance € 7, under 25s and over 65s € 4. Under tens go free. COMERCIAL SQUARE (Praça do Comércio) – Another of the essentuial places to see in Lisbon is this famous square. Also known as the “Terreiro do Paço”, it was constructed after the great earthquake of 1755 on the lands which the royal palace occupied. Since then, Commercial Square became the entrance point to Lisbon and the nerve centre of the city. Boats and rumours arrived from their travels here. Arched, yellow-painted buildings, the arc de triomphe of the Rua Augusta or the equestrian statue of King José I are some of its attractions. Where: Praça do Comércio, A Baixa.

PARQUE EDUARDO VII –This park crowns the popular Avenida da Liberdade, andi s one of the most beautiful in Lisbon. It offers some magnificent views of the city, and is a great place to go for a stroll. Its majestic gardens house diverse monuments, decorated with traditional tiles, a lake and two botanical gardens with exotic plants, which are worth a visit. Where: Parque Eduardo VII, Praça Marqués de Pombal.

These are our recommendations of things to see in Lisbon, but this isn’t all there is. Other tourist attractions include the Santa Justa Lift, the Padrão dos Descobrimentos (monument to discoveries), the cathedral, Rossio Square, the district of Alfama and the Parque das Nações. And to enjoy a well-rounded trip, you should probably go out some night to have a drink of listen to fado, try a typical Portuguese cod dish in one of the best restaurants of Lisbon, and, of you have time, go on a journey to Sintra. Boa viagem!