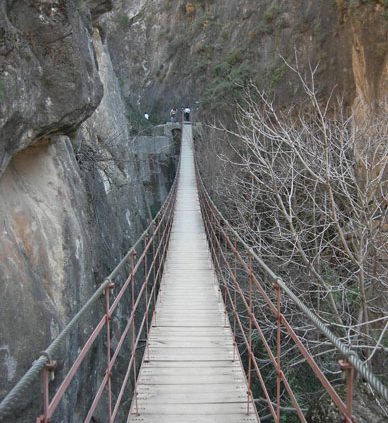 The Andalusian city of Granada, nestled in the foothills of the snow capped Sierra Nevada mountain range, is home to one of Spain’s best known monuments, the Alhambra. The city is a veritable treasure trove of Islamic art and architecture which attracts thousands of visitors every year wishing to experience the rich cultural heritage of the city. On par with the architectural beauty is the natural landscape which can be best experienced by taking one of these treks around Granada.

Cahorros: Starting in the quiet town of Monachil, only 8km from Granada, this circular route follows the Monachil River. The walk takes you through orchards, past waterfalls and is best done in spring when the wildflowers are in bloom or autumn when the leaves are changing colour. Several hanging bridges cross the river at various points making it an enjoyable adventure for children.

Güéjar Sierra- Cerro al Calar: Commanding views of the snow capped Sierra Nevada are a just reward for this arduously steep trek from Güéjar Sierra to the civil war trenches below the peak of Cerro al Calar. The best time to tackle this walk is in spring when there will still be some snow on the surrounding mountains. Once the summit has been reached the walk continues through fields and rock formations before finishing in Güéjar.

Llanos de la Perdiz- This popular trek in Granada is perfect for families as it follows well maintained tracks, paths and occassionally the road. Starting behind the Alhambra this easy walk offers pleasant views of the Sierra Nevada, Sacramonte and Granada’s Albaicín neighbourhood. In summer it is best to start early in the morning to avoid the heat of the day but it can easily be done year round.

Beas de Granada- Granada: An enjoyable 16km walk following the ridge between Beas and Granada. All along the walk you can enjoy the beauty of the Sierra Nevada Mountain range and the quiet surrounds. Best of all it finishes in the heart of the city making it the perfect choice for anyone staying in Granada.