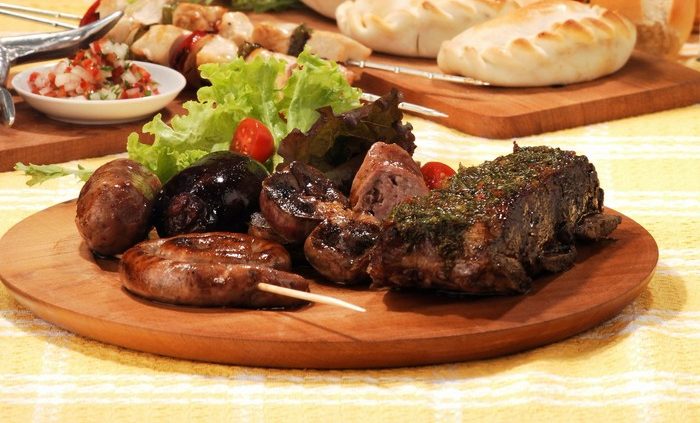 What to eat in Buenos Aires

Argentina has a rich food culture which has successfully combined European with the national and indigenous cuisine. So prepare yourself for some delicious suggestions during your holidays in Buenos Aires. Famous world wide for their high quality meats, Argentinean cuisine features predominantly meat based recipes. Although the typical dishes vary greatly from one region to another there are some that are popular throughout the country.

In Buenos Aires especially, the Italian and Spanish influence is quite evident. Thus you can also try Argentinean pizzas, very different to Italian pizzas, as well as braised steak, breaded beef steak, pasta and gnocchi. Make sure you choose a good glass of wine from the local area to accompany your meal!

Asado Argentino (Argentinean BBQ) – The most typical Argentinean dish and containing the most meat. Asado Argentino consists of barbecued beef and sausages grilled slowly over a charcoal barbeque so that the meat takes on a nice smokey flavour. The tastiest cuts comprise the rib and the flank. Asado Argentino is usually served with chimichurri sauce.

Chimichurri – This delicious Argentinean garnish is used to accompany barbecued meats, dress salads, and to marinade fish or birds. It comprises a liquidy, slightly spicy and very seasoned sauce. It is made with olive oil, white wine vinegar, parsley, oregano, red pepper flakes, garlic and other spices, which really brings out the flavour of the meat.

Choripán – This is a typical sandwich prepared with juicy chorizo and French bread. It is also usually lined with chimichurri sauce. It is very typical of the Boca district in Buenos Aires, where they serve it in many establishments. So when you pass by to visit the Boca Juniors Stadium or to discover one of the areas most famous for tango then make sure you try one of these choripans.

Locro – A traditional stew that, as is often the case with dishes like these, is prepared in many ways. It usually contains corn and pumpkin, as well as lots of different meats including bacon, tripe and chorizo. It is a very healthy dish full of nutrients which is usually consumed in winter and cooked on a low heat. They also usually eat locro on the 25th of May, to commemorate their first independent national government.

Dulce de leche and alfajores – And now for the desserts….Dulce de leche from Buenos Aires is world famous for being one of the best. It is made with milk, sugar and vanilla essence which is cooked until a soft, thick, glossy and very sweet caramel is produced. It is typically eaten on toast or sponge cake, used as the filling for deserts or put on ice cream, etc. Alfajores is another typical dessert in Argentina consisting of several biscuits joined together with a caramel centre (normally dulce de leche) and coated in chocolate.

Mate – Mate is a typical Argentinean infusion that is drunk at any hour of the day. It is prepared by adding hot water to a calabash gourd containing the dried leaves of yerba mate. It acts as a stimulant and has a bitter taste which is often sweetened with sugar and milk. Mate is more than a drink, it is a tradition and icon of this country.

There are, of course, many other typical Argentinean dishes to try in Buenos Aires, such as churrasco (barbecued thin beef steak), matambre (flank steak filled with vegetables, eggs and herbs) and carbonada (stew containing pumpkin, corn, meat, sweet potato and dried peach). If you have time, make sure you try them all!