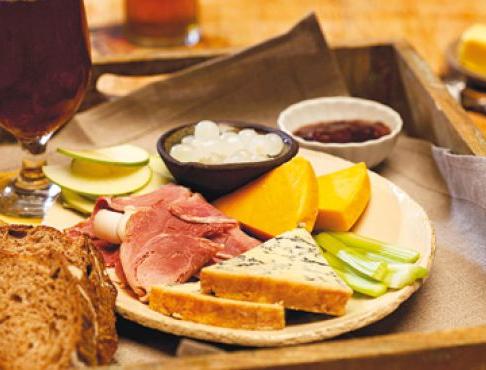 The British are not very famous for tasty and good food, more for the international cuisine on offer which is why very few people know what is typically eaten in the UK. However, despite the common misconceptions, the British have an ample range of typical dishes, varying greatly from region to region, which are delicious, satisfying and greatly misunderstood. So, here are ten typical British dishes which I’m convinced will change your mind for ever. Enjoy!

1. FULL ENGLISH BREAKFAST – Also known as bacon and eggs or a fry-up, and something that, again despite common misconceptions, is eaten on special occasions. Here’s why. It consists of bacon rashers, fried eggs, sausages, beans, hash browns, black pudding, fried tomato and mushrooms served with toast on the side. A real calorie fest but delicious!

2. SUNDAY ROAST – Another one of the more famous British dishes and also known as Sunday dinner, Sunday lunch, roast dinner or Sunday joint. It usually consists of roast meat (beef, chicken, lamb or pork), roast potatoes, mash, Yorkshire pudding, vegetables and gravy (meat or vegetable sauce). The accompanying sauce can vary according to the meat served.

3. BAKED / JACKET POTATO – A British favourite! Quite simply a potato baked in the oven until the skin is crispy and the inside fluffy. It is split down the middle and served with butter or margarine and a variety of toppings such as tuna and mayonnaise, cheese and beans, cheese and coleslaw, etc. You will even find potato vans on the street selling fresh, hot jacket potatoes

4. FISH AND CHIPS – Also a very famous, typical British dish consisting of fried chips served with cod in batter, all deep fried. In this post, we recommend some good places to try it in London.

6. TÉ – One of things that the British are most famous for is tea. Black tea served with milk or fresh cream and sweetened to taste with sugar or honey.

7. AFTERNOON TEA AND CREAM TEA – Traditionally taken between 4 and 5pm but nowadays whenever you want. Afternoon tea consists of black tea with milk served in a teapot accompanied by a range of cakes, pastries and light sandwiches. Cream tea, Cornish cream tea or Devon cream tea is a local speciality in Devon, however it is enjoyed nationwide and comprises tea served with a scone filled with lashings of jam and thick, whipped cream. Yum! Take a look at some of the best places to take an afternoon tea in London.

8. PLOUGHMAN’S LUNCH – Cheddar cheese is a relatively hard, yellow-white, strong cheese originating from Somerset in the Cheddar Gorge. It has a sharp flavour and the stronger it is the crumblier. A ploughman’s lunch features cheddar cheese accompanied by cooked ham, pickle or relish, apples, pickled onions, salad leaves and crusty bread..

9. BANGERS AND MASH – A favourite among the British consisting of quite simply Cumberland sausages (or variations) served on a generous pile of mashed potatoes with peas (sometimes) and rich onion gravy. Delicious!

10. PIES AND CORNISH PASTIES – The British are great fans of these savoury pastries. Great for on the run, a pie consists of a round-shaped pastry, deep-filled with a variety of savoury fillings including cheese and potato, meat and potato and chicken and mushroom, etc. A Cornish pasty is once again a regional food and is in a semi-circle shape. There are a variety of imitations but the real thing contains meat, onion, potato and swede, nothing else.

There are of course a great variety of other tasty, traditional British dishes including shepherds pie, cottage pie, gammon steak with egg, Lancashire hotpot, toad-in-the-hole and haggis, amongst many others. The Real Ales in Britain are also worth a taste. So, you know what to look out for when you go to London. And remember, don’t knock it until you’ve tried it. Enjoy!

Posted in London, Where to eat in London
Laura