Underground Rome and the catacombs 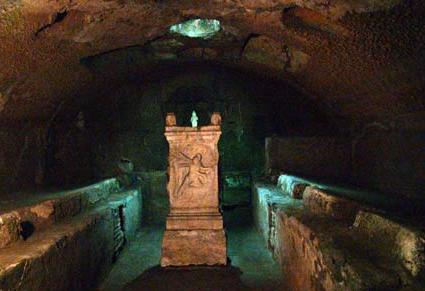 Rome catacombs and the underground city

Rome, the eternal city, has been built on various levels, raising new buildings on old foundations and on top of centuries of history, layer by layer. Hidden under the ground and far away from the stunning marble structures exposed to the light of the sun is the Rome underground amassing mysteries and a wealth of great historical and cultural value. These are some of the spaces in underground Rome….

The Catacombs of Rome

These maze-like tunnels started to be used by Christians as a cult space and hideout, known then as a sect, but above all as a burial place in the first half of the 2nd century AD. There are many catacombs in Rome and they are home to niches, tombs, crypts, small basilicas and cubicles, some decorated with fresco painting and mosaics.

Some of the most important catacombs in Rome can be found under Via Appia Antica, queen of the roman roads. It olden times it was flanked by villas, residences and mausoleums, and still preserves a historic area where it is lovely to go for a nice walk.

Each catacomb closes a different day of the week and month over winter to carry out preservation work. Tours of these underground tunnels are always guided and usually last around 40 minutes. It normally costs 8 euro to get in and the reduced price is 5 euro.

Catacombs of San Calixto – Dozens of martyrs and pontiffs are buried there, and San Calixto lived there for a good while. It also contains the famous crypt of Santa Cecilia. 126, Vía Appia Antica. You can get there by buses 118 and 218. They close on Wednesdays and in February.

Catacombs of San Sebastian – It comprises four levels, but the first is practically destroyed. The most famous martyr buried here is Saint Sebastian, who the outside Basilica is dedicated to, however the apostles Peter and Paul are also worshipped there. 136, Vía Appia Antica. You can get there by buses 118, 218 and 660 and with the Archeobus. It closes on Sundays and towards the end of November to the end of December.

Catacombs of Domitila – They consist of the largest catacombs in Rome. They originated from what was then the property of the Roman noble Flavia Domitila, who lent it its name. Inside the catacombs is the impressive subterranean basilica of the martyrs Nereo and Aquiles. 280, Vía delle Sette Chiese. You can get there by buses 160, 670, 714 and 716. It closes on Tuesdays and in January.

On the north side of the city you will find the other two catacombs that currently open to the public in Rome.

Catacombs of Priscila – They are the oldest and there are some frescos preserved there with images of the Virgin Mary and the Annunciation. 430,Vía Salaria. You can get there by buses 86, 63, 92 and 310. They close Mondays and in January.

Catacombs of Santa Inés – Situated 10 minutes away from the Catacombs of Priscila. The church of Saint Inés can be found there, where the remains of the saint are actually kept. 349, Vía Nomentana. They close Sunday mornings and Monday afternoons.

Of course not all the catacombs in Rome are underground….There are numerous archaeological remains hidden below the surface, as well as a couple of unusual spaces that are also worth visiting. Located on 95, Via Labicana, very near to the Coliseum, the Basilica of Saint Clement is a unique place for observing the restructuring of the typical buildings in Rome. It acts as an archaeological time line from the beginnings of Christianity to the Middle Ages. Below the Basilica itself, you can visit the old church dating back to the 6th century which is accessed through the vestry, and the old Roman villa that originally occupied the place. In one of the rooms, you can even see the water that used to circulate through the Cloaca Massima, the main sewage system in Ancient Rome.

Crypt of the Capuchins

On 27, Via Veneto, surrounded by elegant cafes and luxury stores, they raised the Church of the Immaculate Conception. From the outside, it just looks like another church, however below the surface it is home to a chilling and mysterious space. It is the cemetery of the capuchin monks and consists of several chapels decorated entirely with human bones. Skulls, femurs, coccyges, scapulas and vertebrae form the mosaics, sculptures and complicated decorations giving you goose bumps. The majority of the bones come from the dead capuchin friars who died between 1528 and 1870. It is closed on Thursday.