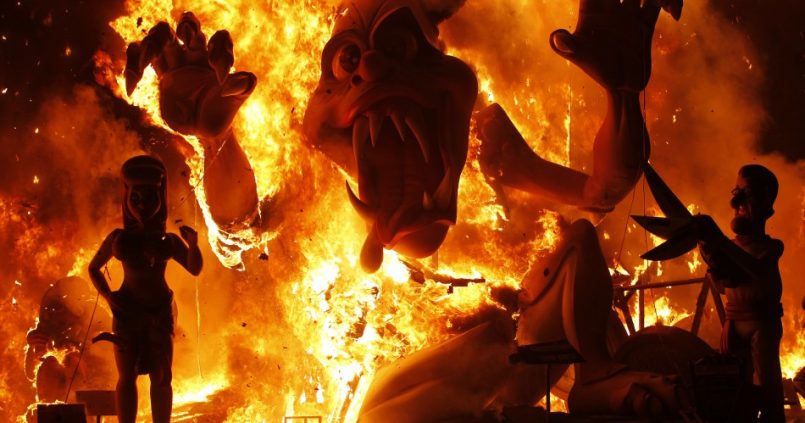 Las Fallas: Satire and Fire in the heart of Valencia

Imagine working all year to create an artistic masterpiece only to see it purposefully razed to the ground less than a week after completion, well this is what happens every year at the Fallas de Valencia. Las Fallas 2015 a commemoration of the patron Saint of Valencia, Saint Joseph, take place this year from the 15th to the 19th of March and include an explosive mix of fireworks, fire and non stop partying over five long days.

Each neighbourhood in Valencia has a "casal faller", a community group who host events and dinners to raise money to construct the ninots and fallas. The ninot a huge figure made of wood, paper, styrofoam and wax usually depicting politicians, actors or football players, anyone who has caught the eye of the casal faller for doing things they shouldn’t have done and deserves a satirical jab. The ninot is then paraded around the streets before being placed lovingly on an elaborate firecracker filled base in the middle of the street; reaching up to 30 meters high these highly decorated monuments are called the falla. The best falla as judged by the Falla commission is saved from being burnt the others are all put to the torch on the 19th of March in what is known as the “crema” (burning).

Other events at las fallas 2015 include “la desperta”, the wake-up, every morning during the fallas brass bands emerge into the streets at 8am and begin playing loud and lively music. They are closely followed by people throwing firecrackers into the streets waking the local residents and inviting them to start the day’s festivities.

The most explosive event of las fallas of Valencia 2015 is “la Mascleta”, taking place in the Valencia town square at 2pm everyday during the festival, begins with the Fallera Mayor or Festival Queen dressed in here traditional fallera dress calls for the pyrotechnician to begin the mascleta. Then the fuse is lit and the atmosphere is filled with smoke and explosions as fireworks and firecrackers explode in a carefully coordinated barrage. It is not only something to see but something to feel when the fireworks go off. Don’t forget your earplugs.

The castles and the night of fire are also events not to be missed at las fallas 2015, when the night sky over Valencia is lit up with fireworks, each night getting progressively bigger until the last night, The Night of Fire, on the 18th of March.

The final night of las fallas, the 19th of March, is what everyone has been waiting for as the huge fallas are burnt to the ground, filled with fireworks they explode into flame, filling the air with thick smoke as the fire takes hold and reducing a year’s work into ashes in less than half an hour. The rest of the night is spent dancing to the sounds of drums and fire works in a massive open air party across the whole city.

In the morning after the smoke has cleared the planning and work for next year’s fallas begins. If you are interested in going to Las Fallas 2015 start booking your accommodation in Valencia now.