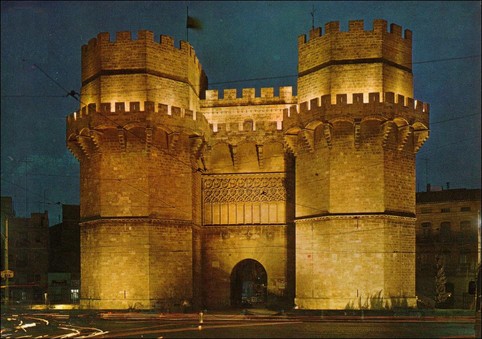 What to see in Valencia

Valencia: classic, modern, daring, with an incredible climate and beautiful beaches. The place the Valencian writer Azorín described in his days as “the city of flowers, of silk and of poetry” is also a city of contrasts where the most futuristic architecture has flourished, where nights out go on for hours and where large sporting events such as motorboating and sailboating have found their home.
There’s lots of things to see in Valencia, but for those who don’t have as much time as they’d like to visit the city, we’ve cooked up a small Valencia travel guide with the bare essentials.

CITY OF ARTS AND SCIENCES – Is it an alien spaceship? A metropolis from a science-fiction novel? No! It’s the City of Arts and Sciences of Valencia, an impressive architectural complex designed by Santiago Calatrava. Inside this avant-garde building, you’ll find the Palace of the Arts, the Hemispheric, the Oceanographic and the Science Museum. A truly essential visit. Where: Av. Autopista del Saler, 7. When: from the 1st of July to the 16th of September, from 10 am to 9 pm, rest of the year from 10 am to 7 pm. How much: various types of tickets available. The combined ticket lasts 3 days, allows access to all installations and costs € 36.25.

LLOTJA DE LA SEDA – Situated in the Plaza del Mercado, the Llotja de la Seda or “Silk Exchange” is one of the most emblematic buildings in Valencia. It was constructed in the c. 15th, the Valencian golden age, to house the flourishing trade of the period. It’s one of the best examples of civil Gothic art conserved to date, and is a UNESCO World Heritage listed building. Where: Plaza del Mercado, 30. When: from Tuesday to Saturday from 10 am to 2 pm and 4.30 pm to 8.30 pm. Sundays and holidays from 10 am to 3 pm. How much: standard entry € 2, concessions € 1.

THE CATHEDRAL AND THE "MICALET" – Another must-see in Valencia is the Cathedral. It was constructed during the c. 13th – 15th, and mixes various architectural styles. Its belltower, popularly known as “Micalet” or “Miguelete”, contains a spiral staircase which allows you to climb up to the viewing point, from which there’s some stunning views of the city and the Meditteranean Sea. Where: Plaza Almoina. When: visiting times run from Monday to Saturday from 10 am to 5.30 pm, Sundays and holidays from 2 pm to 5.30 pm. From March to October, it closes an hour later.

SERRANO TOWERS – These imposing Gothic towers watch over the main entrance of the walled city. In past times, the gates between the Serrano Towers were battened down at night-time, shutting out all those who got distracted, arrived after dark and were subsequently forced to sleep out in the open. They were also used as a prison. Today, they’re one of the main tourist attractions in Valencia, and the place from which the beginning of Las Fallas is announced from. Where: Plaza de los Fueros. When: from Tuesday to Saturday from 10 am to 6 pm (in summer open until 7 pm), Sundays and holidays from 10 am to 3 pm. How much: entrance € 2. Saturdays, Sundays and holidays are free.

LA ALBUFERA – Just a few kilometres from the south of Valencia, surrounded by paddies, allotments and beaches, you can find this natural park, which is well worth a visit. La Albufera in Valencia is the cradle of paella. Here, you can see ‘barracas’ – ancient living places typical of the zone – go for a boat ride, go on different trails through the wetlands to see the fauna and flora, or enjoy the colourful sunsets.

There’s lots of other things to see in Valencia, but we already tiold you that this was a quick guide, with just the main tourist attractions. If you’ve got more time on your hands, don’t miss out on the Fine Arts Museum, the Marqués de Dosaigües Palace or Túria garden. And remember that you can’t truly say you’ve been in Valencia until you’ve gone for a stroll through the district of Carmen, tried a cold orxata or eaten an authentic Valencian paella.