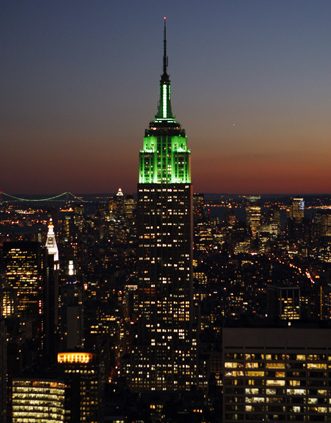 This isn’t your drive-thru chapel in Las Vegas, this is getting married in New York, the most famous, cosmopolitan and exciting city in the United States on Valentines Day. What better than to get married in the city that never sleeps in style, and what we can say in a bigger, better, cheaper, and yup taller way…………..

Think 80 floors above the city streets, and approximately 1,500 feet above the most romantic city in America, New York City on the most romantic day of the year. To be more precise on the observation deck at the Top of the Empire State Building, where every Valentine’s Day, beginning at 12:01 am, 14 couples in a 24-hour period are joined in wedded bliss.

These fortunate couples are all married in a civil ceremony before a New York State Supreme Court Justice in a specially constructed wedding chapel. In addition, all of the lucky newlyweds receive gifts donated by local businesses. No, you won’t be receiving matching sweatshirts or a free eye exam (though several years down the line you may wish you had that prior to the ceremony), but being a member of the Top of the World Marriage Club has its advantages. You’ll be in line to receive a free honeymoon (years past have included Morocco and Jamaica), a $500 shopping spree at Bloomingdale’s, Broadway tickets, dinner for two at Windows on the World, or a weekend at Gurney’s Inn Resort & Spa in Montauk, or Long Island, amongst many others.

And the icing on the wedding cake is that it doesn’t cost a penny. All you have to do is submit an application after January 1st, which should include an essay stating why you want to get married atop the highest building in New York City. It’s that easy. If you’re not looking to get hitched, the normal $6.25 – $12.50 ticket fee for the observation deck is doubly worth it!

So, if you’re getting married and looking for an original way do so then be original and stylish in your story so you can join this prestigious group of newly weds.