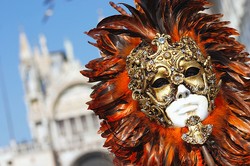 Venice Carnival renowned for its carnival masks and 18th century period costume is one of the most famous carnivals in existence, a magic event with the ability to take you back in time. Venice Carnival 2013 takes place from the 26th of January to the 12th of February. More than two weeks of Carnival in which masks, capes and stunning costumes occupy the city’s streets and squares. Venice Carnival 2013 will be the Carnival of colours since it will pay homage to Venice’s great artists Tiziano and Canaletto and the colours they used. Every night in the Piazza San Marco a concert will be held with a different colour theme and style of music. For example “Purple Rain” will be dedicated to 80’s music, “Yellow Submarine” will pay homage to the Beatles and “Black is Back” will be centred on soul music from the 70’s.

There are many other things to do during the Venice Carnival 2013. The program includes gala dinners, parades, dances, masked balls, chocolate tasting and theatre performances. An ice skating rink will also be installed in the Campo San Polo for children and the young at heart. It is also tradition for visitors and locals alike to stroll through the streets of Venice in their elegant costumes taking photos of themselves amongst the gondolas and palaces of Venice. Surely though the highlight of Venice Carnival is the Best Masked Costume Contest occurring throughout the carnival at the Gran Teatro of Piazza San Marco where competitors parade on stage each vying to be the contest winner by exhibiting their very best period wigs, masks and costumes. Joining the parades are street artists and traditional dancers adding to the atmosphere of the contest. If you want to see the contest or any other show occurring during Venice Carnival 2013 from any of the Gran Teatro’s Box Seats, we recommend you book well in advance due to the large crowds in Venice during the carnival period. The Venice Carnival comes to a close on Tuesday the 12 of February with the "Vogata del Silenzio", a parade of candle lit Gondolas making their way silently down the Grand Canal.

Our apartments in Venice and the Most Serene Republic of Venice are waiting to be discovered.