Viareggio Carnival to be celebrated in Florence 2011 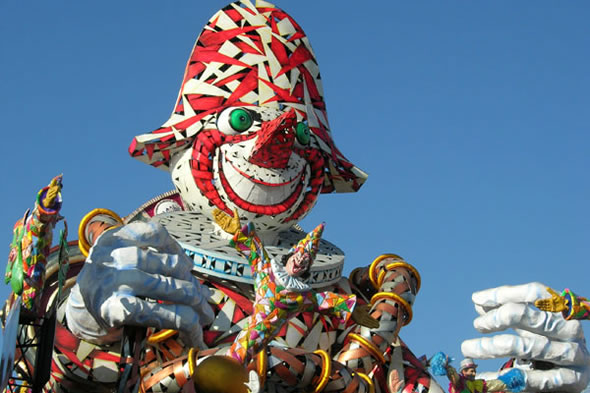 Its carnival time, and what a carnival! The Carnival of Viareggio, an annual event held in the town of Viareggio a short distance away from Florence is considered amongst the most renowned carnival celebrations in both Italy and Europe, and is a world famous celebration. This incredible event will be taking place from the 20th of February to the 13th of March 2011 for the entertainment of visitors and locals alike comprising 16 days of fun during the Mardi Gras festivities i.e. the feasting and merrymaking just before Lent starts with its 40 days abstinence from all things good.

This spectacular carnival is characterised by its high level of visual displays including incredible papermaché floats, which satirise public and political figures, as well as showmen and sportsmen which come to life during the parade with moving arms, opening and closing mouths, and rolling eyes. Huge Trojan horse-like puppets parade around the town, competing for the finest float award. On every float young people and children find a place from which to throw confetti and shooting stars to the crowd, and during the entire period masked balls and parties in the various "rioni" (quarters, districts) are organised as well as numerous sports and cultural events i.e. "Torneo Internazionale giovanile di calcio

The official Viareggio Carnival mask is the "Burlamacco", a clown which wears clothes taken from other Italian masks: checkered overalls, taken from the Harlequin’s costume, a white ponpon stolen from Pierrot’s big puffy blouse, a white gorget – "Captain Scary" style, a red headband and a black mantle. The name Burlamacco derives from Buffalmacco a Florentine painter and a character in the "Decamerone". However, it is also said to be linked to the Lucchese surname Burlamacchi.

The people of Viareggio begin preparing the huge papier-mâché puppets in hangar-like buildings by the sea with the help of craftsmen. Making them and setting them atop the floats requires considerable technical skill, creativity and imagination, in addition to a whole year in which to make them. As can be expected the floats are very colourful, full of humour and irony in the true carnival spirit, and they are huge often taller than the buildings along the promenade.

On set days throughout the carnival period each float carries about 200 people in costume as well as a dozen inside to manoeuvre the weights, counter-weights and levers that prevent the puppet from toppling over, in addition to several people who operate the mechanisms that make heads on the float turn, eyes roll, mouths open and smile, arms and legs raise, birds spread their wings, and every little detail come to life. Each parade finishes with gastronomic events and a massive municipal fireworks display.

In addition to the floats, as mentioned previously visitors can expect lines of people wearing head masks made of papier-mâché, marching bands, and one of Viareggio’s own bands. Finally, the period of carnival is a license to play practical jokes, which include throwing confetti and brandishing soft rubber truncheons and foam weapons.

It sounds amazing doesn’t it? So, if you fancy a little venture out from Florence, we definitely suggest that you hope on the train (or the bus which you can catch near to the train station) and make your way to check out what promises to be an amazing, fun pre-lent carnival celebration. Enjoy!