Visit of Pope Benedict XVI to Barcelona in 2010 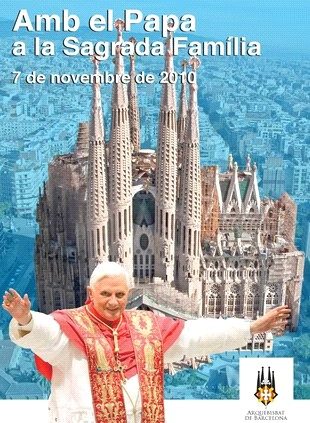 As you probably already know, Pope Benedict XVI will be paying an official visit to Barcelona on the 7th of November where he will be celebrating mass in the Sagrada Familia Cathedral. The Pope will be blessing the Cathedral and the altar. Once the Sagrada Familia, the Cathedral that Antoni Gaudí designed, has been blessed, it will be designated a basilica for its monumental and artistic features by the Pope himself.

This is a once in a lifetime opportunity for faithful churchgoers to take to the streets and show their devotion via the itinerary that will span the different streets of Barcelona.

His first visit in Spain will be in Santiago de Compostela, after which he will be travelling to Barcelona where he will arrive on the 6th of November. During his visit to the city, he will be staying at the archbishopric and will be escorted to the Sagrada Familia by an entourage where the consecration of the Cathedral will be taking place. The Pope will make the journey to the Sagrada Familia in the Popemobile and will be making a detour beforehand round the Cathedral so he can greet his faithful followers already gathered there.

Following the consecration of the Cathedral, Benedict XVI will be celebrating the Eucharist before the Kings of Spain and once all this has been done, the Ángelus will be recited from the Sagrada Familia`s façade of the birth of Christ.

The Sagrada Familia has a 9,000 person capacity, but for security reasons only 7,500 people will be allowed to enter and celebrate mass inside the Cathedral. However, those faithful followers that have congregated outside the Sagrada Familia can follow the homily thanks to the gigantic screens and chairs that will be placed in the streets and the plazas adjacent.

In the afternoon, the Pope will be visiting the Nen Déu en Guinardó Institute, where religious Franciscans will be looking after down-syndrome children and other disabled children. Meanwhile the Pope will be chatting with families and carers, and will receive a present from the children.

For security reasons, the Sagrada Familia`s doors will be closed a few days prior to the Pope’s visit.