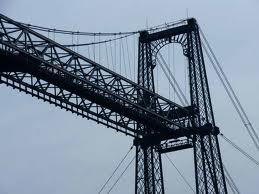 The Hanging Bridge of Vizcaya

The Vizcaya Bridge, popularly known as the Puente Colgante (Hanging Bridge), recently celebrated its 120th anniversary. This monumental iron structure spans the Nervión River uniting the towns of Portugalete and Getxo and is well worth visiting during your holidays in Bilbao.

The Vizcaya Bridge was the world’s first transporter bridge and is the only bridge of its kind still operating today.

The history of the Vizcaya Bridge dates back to the end of the 19th century, it was opened in 1893. Since then an estimated 650 million people have used it to cross the river. Uniting the two sides of the river without obstructing the shipping channel, which at the time was one of the busiest in Europe, was the original idea behind the design of the hanging bridge. Gustav Eiffel’s disciple and collaborator Alberto Palacio y Elissague designed and built the bridge with the assistance of French engineer and businessman Ferdinand Arnodin.

Combining different innovative technologies of the time they were able to successfully complete the Bridge of Vizcaya. Standing 50m above the Nervion River, the bridge consists of two horizontal beams supported by four towers. The gondola which can carry 6 vehicles and up to 200 people moves along the horizontal beams. Technology developed during the construction process was used in bridges all over the world. There are lifts in the towers which take you up to the observation decks located at the top of the towers and from there you can cross the 160m long bridge on foot whilst enjoying the magnificent views over the river and Bilbao.

Since 2006, The Vizcaya Bridge has enjoyed UNESCO World Heritage Status.

Where: Calle Barria, 3, Las Arenas-Getxo, Vizcaya.
Price: Crossing the river costs 35 cents and lasts a little under two minutes. If you want to visit the observation deck the cost is 7€.
When: The bridge operates 24 hours. The observation deck is open from 10am-8.30pm or 9pm depending on the time of year.
Getting There: The best way to get to the Vizcaya Bridge from the centre of Bilbao is on the metro. If you take L-1 (red) the station is Areeta in Getxo, if you are on L-2 (blue) then you must alight the metro at Portugalete. Once there find the river and you will easily see the bridge.