Water parks on the Costa Brava 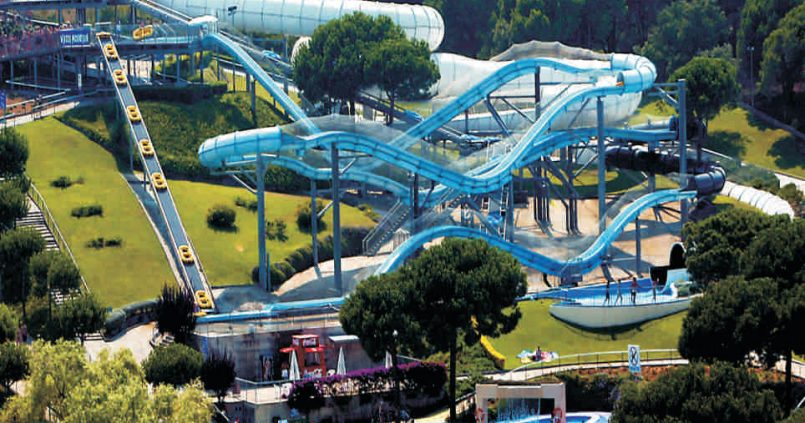 Fun guaranteed on the Costa Brava

On the Costa Brava there are some of the best beaches on the entire Spanish coast, with crystalline waters and spectacular landscapes amongst cliffs and pine forests extending all the way down to the beach. However, if the beach just isn’t enough for you then on the Costa Brava you also have the various water parks where you can slide down their endless waterslides and fully enjoy yourself with your friends or family.

Aquabrava, in Roses, is a water park that has everything. It has several waterslides of all kinds, free falls, jacuzzis, relaxing pools, superslides and large grassy areas where you can relax after spending a few hours getting wet. Aquabrava can also boast the largest wave pool in Europe. Other highlights in the park include their children’s area called Tropical Island, also surrounded by a large grassy area. In addition, there are diverse terraces, bars, fast food stands and restaurants.

In Lloret de Mar there is Waterworld. Winding waterslides, thrilling log flumes, giant funnels with swirling whirlpools, kamikaze rides, relaxing pools and a children’s area are some of the things you can enjoy here. One of the star attractions is its thrilling white water rafting ride, a good part of which is in the dark, in a raft for four people on a 215m river. Situated next to the waterpark grounds, although it doesn’t come included in the entrance price, is also a mini golf course, as well as an 80m high crane for adrenaline junkies who would like to practise bungee jumping.

In Platja d’Aro you will find Aquadiver. It is a little smaller than Waterworld but has many children’s attractions, and of course the classic zigzagging waterslides, wave pools and other attractions with fast and furious descents. One of the most exciting aquatic attractions in the park is the Waterfall, a death slide for only the bravest, which you descend on an inflatable boat eventually reaching breakneck speed.

Marineland, in Palafolls, is a water park combined with a marine zoo where you can enjoy dolphin, sealion and exotic bird shows. Further to the animals that take part in the displays, there are also flamencos, penguins, seals and otters guaranteed to entertain the little ones. The attractions in this park are a little simpler than those in the previous water parks, however Marineland has the advantage of being a two in one water park.

Whichever water park you choose, you are sure to enjoy a refreshing and fun day sliding around in the water. Can you think of a better way of beating the summer heat?