Welcome to the Catacombs of Paris: the empire of Death 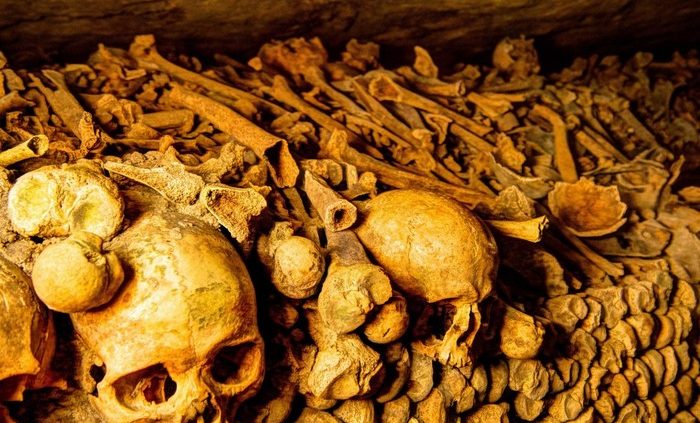 Paris catacombs: the empire of Death

What can we say, Paris has everything. An abundance of museums, art galleries, restaurants, bars, fountains, churches, gardens, monuments, boat trips, alternative tours, etc. You name it, Paris has it, so we racked our Friendly Rental brains to find you something you could do in Paris that is just a little bit out of the ordinary. And we came up with the catacombs…

Welcome to the Empire of Death. Beneath the streets of Paris lies a vast network of Catacombs or the "L‘Ossaire Municipal" in French, referring to the famous underground ossuary in Paris, the final resting place of human skeletal remains. The municipal ossuaries are hundreds of kilometres of abandoned and renovated limestone quarries which comprise the remains of the Paris stone mines, parts of which have transformed into the resting place for the 6 million Parisians buried there.

When you enter the main chamber, what will first appear to be walls built of small stones are in fact huge, orderly piles of human bones: tibias and femurs by the thousands stacked neatly and interspersed with rows of skulls which are arranged (very artistically might I add) in a cross or other pattern.

There are no fully intact skeletons but there are tunnels of bones that stretch on and on. Although not all the catacombs are open to the public, there is a good mile and half that is accessible out of the approximate 170 miles of tunnels extending below the city of Paris. They are really quiet and eerie from the chatter of other people, the dripping of water from the ceiling and the dim floodlights that illuminate the tunnels.

The bones were originally stored in the catacombs after being transferred bit by bit from overcrowded church cemeteries and following many complaints of disease caused by improper burials, mass graves and earth contaminated with decomposing remains. Thus, after a century of trying to decide what to do with the remains of the accumulated dead, it was decided that they would be relocated to the abandoned stone quarries, so in 1786 work began.

What remains of the ossuaries today can be accessed in Place Denfert Rochereau in the 14th Arrondissement. Visitors first descend a 19 metre narrow spiral stone stairwell into the darkness, and just before they enter the main ossuary, there is a stone portal inscribed with “Arrête, c’est ici l’empire de la Mort" (‘Stop, this is the empire of Death’).

So, if you would like to take a sneaky peak of the Paris empire of Death, learn about the secrets and the history of this interesting city, then there is right up your street (or below it…).