What to do in Granada 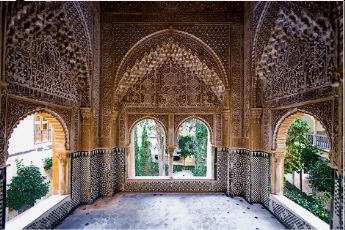 Tourist Guide to Granada, the city of the Alhambra

Welcome to Granada, the city of the Alhambra, a magic place where Romans, Moors, Jews and Christians have left their mark. Bathed in sun, this Andalusian city hides an enormous amount of architectural treasures and secrets just waiting to be discovered. To join you in the adventure, here is our little tourist guide with the outstanding sights to visit in Granada. The Alhambra- You haven’t visited Granada unless you have visited the Alhambra and the Generalife Gardens. This centuries old palace has captured the imagination of artists, poets and tourists and is one of the world’s most visited tourist attractions. Tickets for the Alhambra can be bought at the ticket office but they sell out very quickly so we recommend buying your tickets firstthing in the morning or alternatively purchase them over the internet when you reserve yoru tickets and accommodation in Granada. Where: C/ Real de la Alhambra When: Open everyday from 8:30am night tours also available. Admission: General admission 13€

What else to do in Granada apart from the Alhambra? Carmen de los Mártires- Very close to the Alhambra is the house of Carmen de los Mártires, Carmen of the Martyrs. A palace constructed in the 19th century it is surrounded by an enormous Roman style gardens. It is well worth strolling through the gardens and contemplating the not to distant Sierra Nevada. Where: Calle San Pedro Mártir When: 10am-6pm Closed in August. Admission: Free Cathedral- As has happened in many places throughout Spain, the Cathedral of Granada is built on the ruins of the Mosque of Granada. The cathedral is considered a masterwork of the Spanish Renaissance. In the chapel are the remains of the Catholic Monarchs. Where: Gran Vía de Colón, 5. When: Mon-Sat 10:45am- 1:30pm, 4pm-7pm. Sunday and Holidays 4pm-7pm Admission: 4€ Albaicín- located on the mountain, Albaicín is an old Moorish neighbourhood, complete with the typical white-washed houses and narrow streets one thinks of when imagining Andalusia. The neighbourhood conserves some renaissance and penitent monuments. Another of Albaicín’s attractions are the scenic lookouts, the most famous of which is San Nicolás which offers stunning views of the Alhambra and the Sierra Nevada. Sacromonte- Sacromonte is the city’s gypsy neighbourhood and in many aspects it appears as if time has stood still. Famous for its cave homes, excavated in the hard mountain rock and for its Flamenco shows. Together with Albaicín it is one of Granada’s best known neighbourhoods and shouldn’t be missed. El Bañuelo- Located only a few minutes away from the cathedral are these Arab baths dating back to the 11th century and whose entrance is almost invisible from the street. They are one of the most complete and best preserved in Spain which makes them an interesting place to visit in Granada. Where: Carrera del Darro, 31. When: Tues- Sat 10am-2pm. Admission: Free Paseo de los Tristes- This beautiful spot at the foot of the Alhambra stretches along the banks of the Darro River. The official name is the Paseo del Padre Manjón but it is popularly known as the Walk of the Sorrowful, “paseo de los trisites”, because funeral processions passed this way on the way to the cemetery. It is a beautiful spot to stop for some tapas, enjoy the views and soak up the atmosphere of Granada.

That is not all there is to see… There are many other things to do in Granada: the Cartuja Monastery, The New square, the University, the Realejo, the Alcazaba and the Corral de Carbon. If you want to be adventurous explore outside the city and discover the villages of Alpujarra. Enjoy your travels.