What to Eat in Prague? 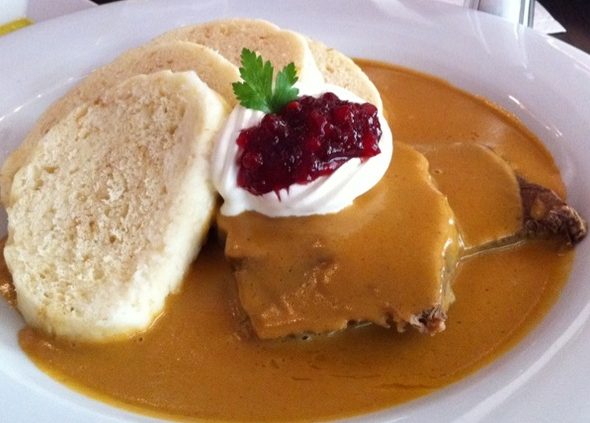 What to Eat in Prague? Delicious Czech Food, Of Course!

So, you are going to visit Prague! You know about the world famous astronomical clock with its intricate movements and figurines which have been marking time for centuries, the spires and bridges adding an air of mystery and intrigue to the city especially when shrouded in fog, the absolutely staggering amount of deliciously tasty beers and the sights. You have your weekend in Prague planned but what about the food? Did you know there is some really scrumptious food in Prague. Here is a guide of what to eat in Prague.

Česneková Polévka: A rich garlic soup containing chunks of dark rye bread and diced potatoes. A touch of marjoram, fresh ground black pepper and chopped parsley round out this delicious soup. Despite what you may think it is absolutely delicious and said to be good for the health.

Bramborová Polévka: A hearty soup containing potatoes, carrot, celery and mushrooms add a bit of garlic and oregano and you have a delicious starter to any Czech feast.

Following what many would consider to be a rather heavy starter comes an even heavier main course. Be warned the Czechs love their meat just as much as their beer and it usually comes smothered in gravy and served with either bread or potato dumplings. Get ready to undo your belt a notch or two.

Koleno:An enormous chunk of roast pork knuckle which has been marinated in dark beer with herbs for some time. Crispy on the outside and soft, juicy and tender on the inside, the meat just falls off the bone. Koleno can take about 45 minutes to prepare so whilst you are waiting you can sample some local beers.

Vepřo-knedlo-zelo: Sounds really exotic but really it is roast pork, bread dumplings and sauerkraut. Most likely to be swimming in an abundant amount of delicious gravy, the dumplings really come in handy when it comes to mopping up any remaining gravy. The sauerkraut makes this traditional meal a little lighter than your average meal. When I say little I mean miniscule.

Svíčková na smetaně: Delicious beef sirloin drowned in a thick vegetable based gravy topped with a dollop of cranberry jam, a slice of lemon and cream and of course some dumplings on the side. I can hear my arteries hardening from here. Despite what it may sound like it tastes absolutely delicious and a meal Czechs are proud to claim as their own.

If after all that you are willing to give some dessert a go, you won’t be disappointed. Topping the list of desserts is…

Ovocné knedlíky: Divine fruit filled dumplings, makes a welcome break from the bread dumplings. These little treats are usually filled with seasonal fruits, strawberries, plums and apricots. Served topped with butter or cheese. Usually eaten for dessert at lunch rather than dinner.

Next time someone asks you what to eat in Prague. You can tell them there is a selection of the most delicious meat and dumpling dishes you are unlikely to find anywhere else in the world. Dobru Chut*