Where to get the best Craft Beer in Barcelona 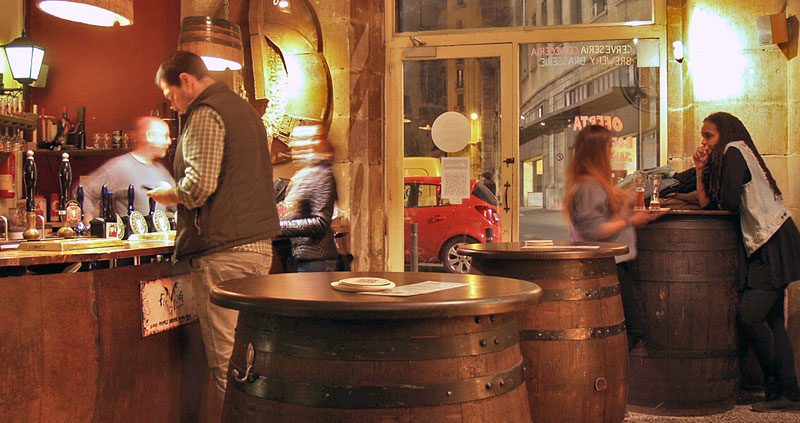 Irish, Belgian, German, lagers, ale, bitter, double malt, wheat…It doesn’t matter what kind it is, beer gets people excited. Even though Spain isn’t one of the world’s big beer drinking nations, beer is gaining a firm foothold in this traditional wine producing country. The culture of home brewing and microbrewing is becoming more popular in Barcelona and there are now a great number of local and imported artisanal beers for you to enjoy. If you are looking to move away from the typical Estrella, Cruzcampo, San Miguel and Moritz served at your local, follow us as we take you on a tour of where to get the best beer in Barcelona. 2D2Dspuma-A bar and shop where you can try hundreds of artisanal beers from around the world. We recommend you accompany your beer with some patatas bravas or a hamburger. And if you like what you tasted you could even sign up for one of their homebrewing courses. Where: C/ Manigua, 8.

Cerveteca- In this old bodega they have artisanal beers on tap, imported, ecological and alcohol free. If the range of beers has you feeling a little overwhelmed about what to order, ask the friendly staff and they’re more than happy to give you their expert opinion. It’s a great place for a beer when you’re exploring the Gothic quarter. Where: Carrer d’En Gignàs, 25

Homo Sibaris- One of the original artisanal beer stores in Barcelona. They have various beers on tap which change regularly as well as good selection of imported beers. Accompany a beer with some tapas. Brewing courses and beer tastings are also held regularly. Where: Plaça d’Osca, 3. Cervesera Artesana-This small and cosy bar is a classic amongst Barcelona’s brewers. Aside from the enormous range of imported beers, they brew their own. You can watch the brewing process through the large glass windows. Where: C/ Sant Agusti, 14. La Resistencia- A good bar to enjoy a few pints of local and imported artisanal beer. There are 12 beers on tap which they rotate regularly, tapas are also served to help you go the distance. Where: C/ Viladomat, 7. Ale & Hop- Hidden away in the Born this small out of the way bar which is worth the effort seeking out. It is the perfect option for those wanting to escape the crowds of some of the other bars in Barcelona. Apart from the daring selection of beers they have some different vegetarian tapas for you to try. Where: Basses de Sant Pere, 10 bis.

Cervecita nuestra de cada dia-Another Barcelona bar which treats the nectar of the gods with respect. You are spoilt for choice as there are more than 600 beers from all over the world for you to try. Brewing courses, tastings and an exhibition/event are also available. Hallelujah! Where: C/ Llull, 184.

Black Lion-Walking distance to Camp Nou is Barcelona’s oldest English pub. It is the place to come to watch National and European football on the big screen or listen to some great live music. Best of all it has over 50 varieties of beers of which 30 are artisanal both local and imported including the famous “Game of Thrones” beer. Where: Evarist Arnus, 70.

That brings to an end our tour of where to get Barcelona’s best beers. This map will help you find them all. Of course there are many more which haven’t made it onto the list but who deserve to be. So if your favourite isn’t there let us know by leaving a comment.

A Tour of Baroque Rome

Live the 2018 Seville April Fair to the Full