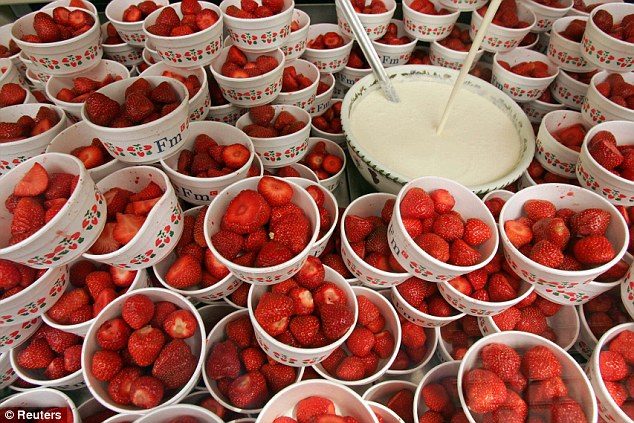 The London 2012 Wimbledon Grand Slam dates have been set from June 25th to July 8th. During this period, top tennis names will battle it out in a competition that is as nerve-wracking as it is very British indeed.

The food and drink that will be on offer at Wimbledon 2012 is a legend to itself. “Wimbledon” has become more or less synonymous with “strawberries and cream”, and during the event a whopping 28,000 kilos of the juicy fruit are typically served. For a truly British Wimbledon 2012 experience, make sure one of the 200,000 glasses of Pimm’s typically sold is yours. This spicy and delicious liquor is normally served in a cocktail with lemonade and fresh fruit such as strawberries, cucumber and mint. Top off with one of the 150,000 scones sold, or one of the 30,000 portions of fish and chips, and you’re ready for game, set and match.

Although checking out the dress code in the Royal Box and watching streakers on the pitch are fabulous sports in their own right, what you’re really here for should be the sport. Bookies’ favourites of Wimbledon 2012 Spanish Nadal and Serbian Djokovic seem destined to continue their long feud, which Nadal is currently winning at 17-14. Czech Kvitová and Russian Sharapova are hotly tipped for the Ladies’ Singles, as well as veteran American Serena Williams and current world nº 1 Belarusian Victoria Azarenka.

Getting your hands on Wimbledon 2012 tickets can be difficult. One option is to try to get your hands on an exclusive Debenture ticket. Prices range from £ 281 to £ 3212. A cheaper option is to queue, which is a sporting event in itself. To see a full day (starting from 11am – 12pm), start queuing at around 8am. Top tickets require overnight queuing, where you will be offered your own patch in Wimbledon Park to stake your claim. In true British fashion, the queue is orderly and civilised and you’re allowed to leave for refreshments and toilet breaks. A second batch of tickets is released at 5pm and cost £ 14.

Whether you’re a tennis aficionado or just a passing fan, Wimbledon 2012 offers the opportunity to take a unique foray into the weird and wonderful world of British culture. Just don’t forget your brolly!