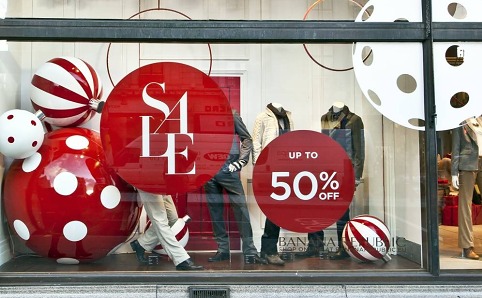 Yes, it’s that time of year again and the post-Christmas sales have returned to London even bigger and even better this festive season with scandalous reductions on shopping for a very merry New Year! They’ve already started but the discounts will be flowing right up until the end of January so get ready to fight your way through the stampedes and bag yourself a bargain.

Selfridges – The Selfridge sales is a great place to start with delicious discounts on a range of fashion, homeware, shoes, accessories and much, much more. Huge cuts and some amazing bargains can be found here to help stretch your Christmas money out a little bit more this year so make sure you don’t miss out. Where:400, Oxford Street. When: Up to Tuesday the 31st of January. Transport: Oxford Circus.

Harrods – The madness begins at the prestigious Harrods department store with discounts starting at 30% off the price of goodies across its many departments. Where:87-135, Brompton Rd. When: Up to Tuesday the 31st of January. Transport: Kensington.

Harvey Nichols – Shoppers are in for a treat with up to 70% off and a further 10% discount for cardholders. Christopher Kane, D&G and Diane Von Furstenberg are all within your reach for quite a bit less. Where:109-125, Knightsbridge. When: Up to Tuesday the 31st of January. Transport: Knightsbridge.

House of Fraser – Supposedly their best ever winter sale yet, House of Fraser are pulling out all the stops and offering crazy savings on Biba lingerie and coveted Vivienne Westwood items, etc. Definitely worth getting out of bed for on those chilly winter mornings in London. Where:318, Oxford Street. When: Up to Tuesday the 31st of January. Transport: Oxford Circus.

John Lewis – John Lewis’s Christmas ad certainly did the trick this Christmas for many and with up to 50% off many items across the store including furnishing, fashion and shoes, as well as special buys and one-off ranges, the festive season is going to last a bit longer this 2011-2012. Where: 300, Oxford Street. When: Up to Tuesday the 31st of January. Transport: Oxford Circus.

Vivienne Westwood – The Queen of British fashion is making shoppers very happy this sale season with discounts on her fashion labels starting at 30% off. Anglomania and Red Label for men and women, in addition to an array of accessories can be purchased at a portion of the original price in Vivenne Westwood stores across London. Outstanding! Where:44, Conduit Street. When: Up to Tuesday the 31st of January. Transport: Oxford Circus.

Here’s a map so you can find your blissful way to all the bargains. Happy shopping!

Change of U2 concert date in Seville

Theatre and themed entertainment in the Medieval Banquet, London!

The most promising exhibitions this autumn in Barcelona