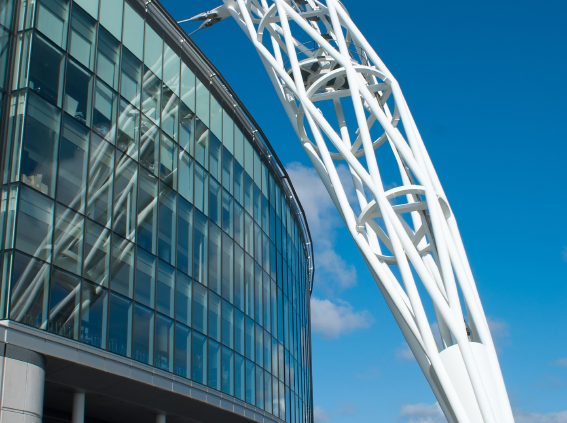 The new Wembley Stadium opened in London in 2007 on the site of the older stadium which had been the home of English football since 1923. The new stadium is instantly recognisable by a huge arching structure which forms part of the world’s longest unsupported roof and is used to ensure that events go ahead even during the wettest weather the country has to offer. It is the second largest stadium in Europe beaten in terms of capacity only by the Camp Nou in Spain (FC Barcelona’s home ground).

As with many stadia around the world Wembley Stadium can be reconfigured to hold different and non-sporting events but to football fans around the world it is simply the new home of English football – and a spectacular new home at that. For British football teams that succeed in the main national contests like the FA Cup Final Football League Cup Final and the FA Community Shield the chance to play at Wembley can be the highlight of a professional football career – it really does mean that much to them. It is also the venue for a number of international friendly matches and a regular season American football game

Attendance at world class football matches does not come cheap but Wembley Stadium has the perfect solution for families who want to enjoy the Wembley experience at a discounted rate. The Wembley Family Enclosure offers excellent value for money with discounted tickets and being a family area you have the added security of knowing that your children will be welcome and secure from the rowdiest behaviour of over-enthusiastic football fans in the rest of the stadium.

Wembley Stadium is served by three London Underground lines stopping either at Wembley Park Station or Wembley Central Station (at which two over ground railway services also stop). Four major bus routes stop at the stadium and if you choose to drive the venue has two huge car parks (although pre-booking for the car park is also advisable). As you would expect for a major modern football stadium the facilities are excellent and there is no shortage of places to buy food and other refreshments.

Whether you are a footy-mad family already or introducing the kids to the experience of a live football match for the first time the Wembley Family Enclosure will make for a truly memorable day out. Painted faces and silly wigs are de rigueur for kids in the Family Enclosure and practice your football chants where the pronunciation is always “Wem-ber-ley” and “En-ger-land”.

Apartment of the Week in Venice, the Casanova

Apartment of the week in Istanbul: the Kempinski 6

Apartment of the week in Barcelona – the Villa Victoria